Updated on March 14th, 2017 by Quertime Writer in Web Tools

A “music-junkie”, according to Urban Dictionary, is a person who is always exploring the many different genres of music and never really “sticks with one genre.” For him, music is a universal language and knows no boundaries. And for a person to explore the vast sea of music, music-streaming websites like Spotify and Soundcloud are the perfect ships!

Back when there was no internet, music lovers had to collect vinyl, tapes and/or CDs of their favorite albums. Exploring new music was a quite hectic and somewhat expensive hobby back then, and it also required a lot of space to store all those records. But then came Rhapsody, the first online on-demand music store subscription which gave music lovers an access to a huge digital library of music for a fee which had to be submitted on a monthly basis. Rhapsody opened the doors to online music streaming and soon a number of music streaming websites made their appearances on the web.

Streaming music websites have revolutionized the way we listen to and store our music. There is no longer a need for a physical media such as a tape-recorder or a CD player, plus there isn’t any need to buy a table or a mini-cupboard to store all your cassettes and CDs anymore since all the music is bought and stored digitally and is just one click away. And the best thing? You can explore hundreds of genres, without ever having to leave your room!

Currently based in Berlin, Germany (originally founded in Stockholm, Sweden,) Soundcloud is one of the biggest dogs of music streaming. Launched in 2008, today it attracts more than 175 million unique listeners each month. Soundcloud enables its users to upload and listen to unlimited music for free.It’s like the YouTube for sounds.

Spotify
Spotify is a commercial podcast, music streaming and video sharing website. It provides music, podcasts, videos and relevant content from BBC, Sony, EMI, Warner Music Group and Universal. However, unlimited streaming isn’t free; a $5/month fee is to be paid for that. Currently, Spotify is available in North America, most South-American and European countries, Malaysia, Hong-Kong and Australia.

Pandora
Pandora is a music streaming and auto-recommendation service. It searches and builds a channel/playlist with music that’s most similar to your taste. The service cost a $3.99/month and is currently only available in the US, Australia and New Zealand. 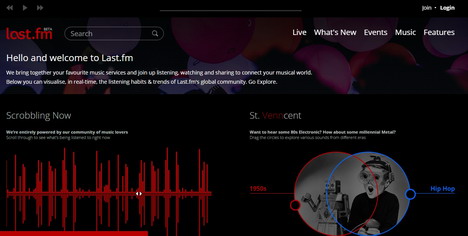 Founded in the UK in 2002, it is one of the first music streaming websites to emerge. Last.fm recommends songs and artists based on your taste. Most of the features are free, with ads, but if ads annoy you and you want access to all the features, there is a monthly fee of $3.

The father of all modern music streaming websites, Rhapsody was launched in 2001 as an on-demand music streaming service. The site is still one of the best despite the occasional unresponsive nature. There is a $10/month fee which gives you access to a huge range of music.

Bandcamp
Founded in 2007, Bandcamp is a private music streaming and purchasing service. Like Soundcloud, Bandcamp is the perfect for underground bands/artists to advertise their music and get exposure. The way Bandcamp works, is that people listen to your music, and if they like it, they pay for it. Simple as that.

Slacker Radio
Available only in the US and Canada, Slacker Radio is thought as one of the biggest competitors of Pandora. Most features are available for free but with ads, and if you want to get rid of those and unlock all features you’d have to pay $4 per month.

NoiseTrade
Just another music streaming and downloading website. But what makes NoiseTrade unique is…well, the fact that it allows artists to “connect” with their fans through the exchange of free music for email-addresses & postal codes!

Rdio offers free streaming with ads and monthly subscription with no ads and full features. Currently, the service is available in 85 countries.

Google Music
Google Music allows users to upload and listen to their personal playlist and does not allow them to listen to other music. It is designed for users who don’t have enough space on their computer/iPod/mobile-phone to store all their music.

TubeRadio.fm
Using an iTunes-inspired interface, TubeRadio is the perfect place for streaming music directly from YouTube.

AH.fm
AH.fm is the best service for those interested in techno and electronic dance music.

Amazing Tunes
Amazing tunes is a radio and music streaming website. You can sign-up either as a fan, artist or a Manager/Label/PR.

ShoutCast Radio Directory
A recording and broadcasting software launched in 1999, ShoutCast enables anyone to create their own radio station and start broadcasting. Naturally, it is a decent medium for music streaming as well.

Just Hear It
Just Hear It is a search engine for music and a music streaming website. Launched in 2008, it gives its users access to its library of over 16 million songs! 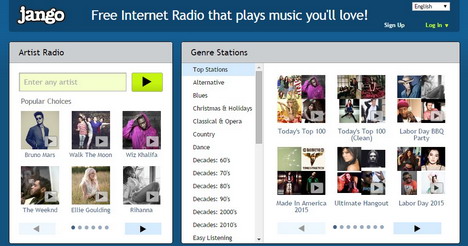 Jango lets its users create a radio station based on the type of music they listen to. The good thing about Jango is that it offers unlimited ad skips and a “similar” tab which shows a list of artists similar to the one you’re currently listening to.

Streampad
Streampad is a music streaming website which allows streaming of music on your websites as well after you add it.

Blip.fm
Blip.fm is like a cousin of Soundcloud. It offers free music streaming and uploading, plus allows you to make a radio station of your own.

Jelli is just another online radio broadcasting service, but with a single huge advantage. It displays which song is being played on which station and allows users to rate those songs as well, to improve listeners’ experience.

Musicovery
Musicovery recommends artists and creates playlists based on your “mood.” When you enter the site, it asks you about your mood and lets you answer via a graph, in which X-axis goes from dark to Positive, and a Y-axis going from calm to energetic.

Musopen
Musopen is the best place to visit for those who are into classical music.

22tracks
22tracks is a unique music streaming service which streams music based on your location. As of yet, the site only streams music from Amsterdam and Brussels area but it definitely has a bright future.

Curious, adventurous, wild – The three words that best define Nikki. She loves to travel, read and write. Currently, Nikki is working as a writer at Assignment Cafe, the best place for Assignment Writing Online. Looking for a place to buy-assignment? Head right to assignment cafe!