Updated on July 2nd, 2018 by Jules, Quertime Editorial in People

On October 5, 2011, Steven Paul “Steve” Jobs, former CEO of Apple, died in California at age 56, seven years after being diagnosed with pancreatic cancer. He was a visionary, pioneer and genius in the field of business, innovation, and product design, and a man who had profoundly changed the face of the modern world. His death was widely mourned and considered a huge loss to the world. 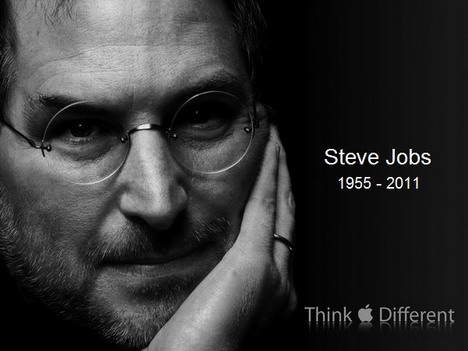 In today’s post, we would like to share with you the story of this legendary visionary. We’ve collected many great photos and amazing videos about him which would definitely be inspirational and motivational to you all. Indeed, Steve Jobs has not only changed the world with his innovative products and memorable quotes, but also with his stories of life and careers.

1955 – Jobs was born and adopted
Jobs was born in San Francisco to Joanne Carole Schieble, an American of Swiss and German ancestry, and Abdulfattah John Jandali, a Syrian, both graduate students. Jobs was placed for adoption after Schieble’s father opposed their marriage. He was adopted by the family of Paul Jobs and Clara Jobs who later moved to Mountain View, California. 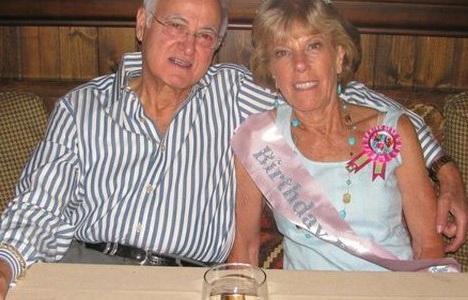 1972 – Jobs dropped out from college
Jobs attended high school in Cupertino, California. He frequented after-school lectures at the Hewlett-Packard Company in Palo Alto, California, and was later hired there, working with Steve Wozniak as a summer employee. 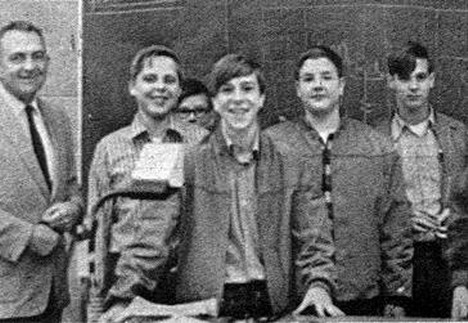 Young Steve Jobs in the middle

Following high school graduation in 1972, Jobs enrolled at Reed College in Portland, Oregon. Although he dropped out after only one semester, he continued auditing classes at Reed, while sleeping on the floor in friends’ rooms, returning Coke bottles for food money, and getting weekly free meals at the local Hare Krishna temple. 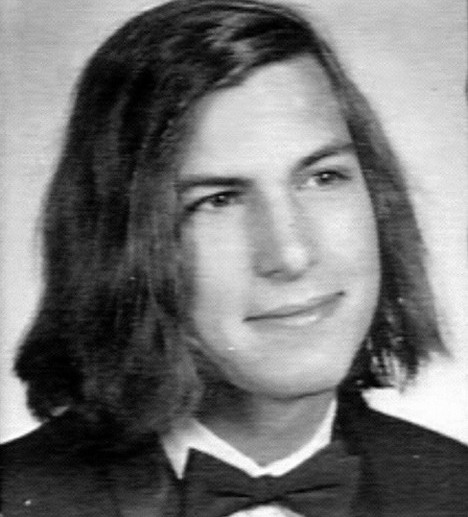 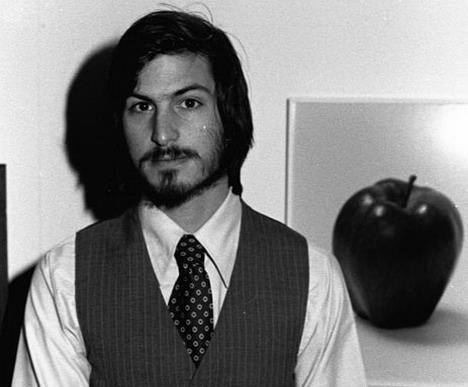 1974 – Jobs becomes a Buddhist
Jobs travelled to India to visit Neem Karoli Baba with a Reed College friend Daniel Kottke, in search of spiritual enlightenment. He came back a Buddhist with his head shaved and wearing traditional Indian clothing. 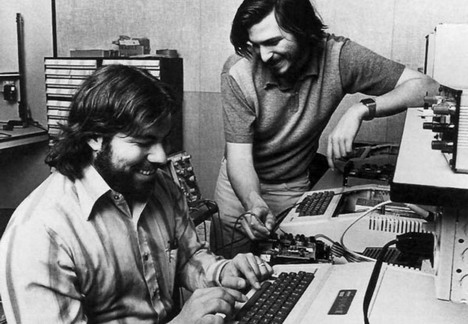 1983 – Pepsi-Cola president serves as Apple’s CEO
In 1978, Apple recruited Mike Scott from National Semiconductor to serve as CEO for what turned out to be several turbulent years. In 1983, Jobs lured John Sculley away from Pepsi-Cola to serve as Apple’s CEO, asking, “Do you want to sell sugar water for the rest of your life, or do you want to come with me and change the world?”

1984 – Jobs introduces Apple Macintosh to the world.
The Macintosh became the first commercially successful small computer with a graphical user interface.
Below video is Apple’s famous “1984” commercial for Macintosh.

1985 – Jobs was fired from Apple
An industry-wide sales slump towards the end of 1984, caused a deterioration in Jobs’s working relationship with Sculley as well as layoffs and disappointing sales performance. An internal power struggle developed between Jobs and Sculley has caused Jobs being removed from his managerial duties as head of the Macintosh division. Jobs resigned from Apple 5 months later. 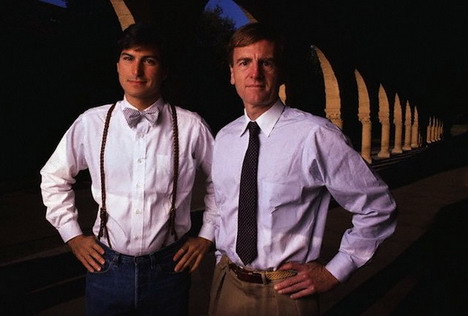 Steve Jobs and John Sculley, the former CEO of Apple

Jobs later claimed that being fired from Apple was the best thing that could have happened to him; “The heaviness of being successful was replaced by the lightness of being a beginner again, less sure about everything. It freed me to enter one of the most creative periods of my life.” 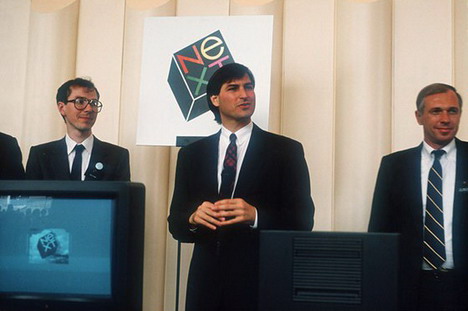 1986 – Jobs founded Pixar
In 1986, Jobs bought The Graphics Group (later renamed Pixar) from Lucasfilm’s computer graphics division for the price of $10 million. After years of unprofitability selling the Pixar Image Computer, it contracted with Disney to produce a number of computer-animated feature films that Disney would co-finance and distribute. The first film produced by the partnership, Toy Story, with Jobs credited as executive producer, brought fame and critical acclaim to the studio when it was released in 1995.

1996 – Jobs returns to Apple
In 1996, Apple announced that it would buy NeXT for $429 million. The deal was finalized in late 1996, bringing Jobs back to the company he co-founded. He was formally named interim chief executive in September. In March 1998, to concentrate Apple’s efforts on returning to profitability, Jobs terminated a number of projects.

1997 – The Microsoft Deal at Macworld Boston
Steve Jobs and the almost bankrupt at the time Apple Computer making a temporary deal with Bill Gates and Microsoft. This was one of the most intelligent decisions that Jobs made upon his return to Apple.

1998 – Jobs introduces the very first iMac.
The iMac helped set the standard for the modern Apple even as we know it today.

2001 – The First iPod Keynote
Steve Jobs introduces the very first iPod at a low key event. The premise behind the iPod was simple – 1,000 songs in your pocket.

2004 – Jobs diagnosed with pancreatic cancer
In mid-2004, Jobs announced to his employees that he had been diagnosed with a cancerous tumor in his pancreas. Jobs stated that he had a rare, far less aggressive type tumor. He resisted his doctors’ recommendations for evidence-based medical intervention for nine months, instead consuming a special alternative medicine diet to thwart the disease, before eventually undergoing a reconstructive surgery in July 2004, that appeared to successfully remove the tumor. During Jobs’s absence, Timothy D. Cook, head of worldwide sales and operations at Apple, ran the company.

2005 – Steve Jobs presents the iTunes Phone.
This was Steve’s first attempt to bring “iPod phone”-like product to the market in the form of Motorola’s Rokr after the iPod started to achieve massive success in 2003 and 2004.

2005 – Steve Jobs’ Stanford Commencement Speech
Steve Jobs delivers his commencement speech to the graduates of Stanford University in 2005. In it he talked about getting fired from Apple in 1985, life and death. 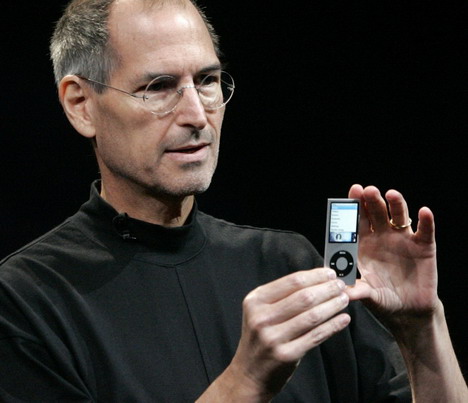 2010 – Jobs introduces iPad
The success of iPad has created a seismic impact on education, publishing, media consumption and computing in general.

The photo above shows how attached he is to his wife, Lauren Powell Jobs and he probably knew that this was his last keynote address.

2011 (August 24) – Steve Jobs resigns as Apple CEO
Apple’s Board of Directors announced that Steve Jobs has resigned as CEO of the company. Apple’s Chief Operating Officer, Tim Cook, has been named Jobs’ successor.

“I have always said if there ever came a day when I could no longer meet my duties and expectations as Apple’s CEO, I would be the first to let you know. Unfortunately, that day has come.” Jobs said in letter to the board.

2011 (October 5) – Steve Jobs Dies at 56
A day after the news of the release of the iPhone 4S, the Apple co-founder passes away on October 5, at age 56. This marks the end of a legendary visionary’s journey. Job’s health had been slowly declining since 2004, when he announced his fight against pancreatic cancer. 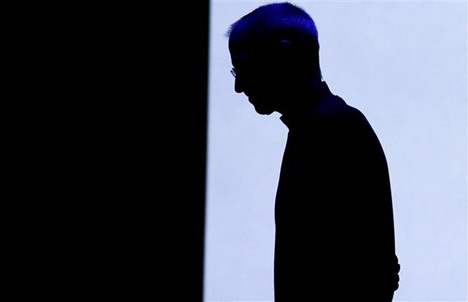 Top 24 People Who Changed the Internet