Posted on March 7th, 2017 by Quertime Writer in Mobile

As a mobile heavy society has taken over, different keyboards have appeared. Arguably one the greatest of these is Gboard, created by none other than Google.

Why exactly should you use it, though? What sets it apart from a handset’s default keyboard though and what can it do for you?

Of course there’s only one place to start. It is a keyboard in every sense of the term but Gboard actually incorporates an alternative way to type – glide type. Simply swipe to type and as if by magic, whatever you want to write appears, usually with incredible accuracy.

Spotted a mistake? Gboard lets you effortlessly go back and forward with all the usual screen tapping.
The space bar doubles up a track pad, allowing you to go back and forth at will with just a few little swipes left and right.

If you’re one of many who have welcomed emoji as a part of everyday life, you’ll be thrilled to know that Gboard makes it fantastically easy to find the perfect little smiley to use.

All you have to do is tap the emoji button and a search bar will appear, letting you type whatever you want and returning any relevant emoji.

Had enough of having to leave your conversation to get to Google before inevitably taking a screenshot or copy and pasting snippets of information? All of that drama has been removed thanks to the help of Gboard with search results available directly from within the keypad.

Just press and hold the Google logo for a second you’ll be presented with a Google search bar. Just use it as you normally would and send what you’ve found straight over.

You may not be a fan of everything Gboard has to offer and you don’t have to put up with it I you don’t want to. The actual Gboard app itself is where you’ll find all of the customisation options on offer. 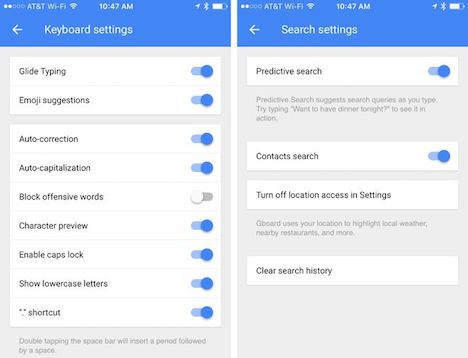 There’s a whole host of keyboard and search settings to play around with including enabling and disabling glide typing, autocorrect, emoji suggestions and predictive search, as well as clearing history.

Just like emoji, GIFs are becoming even more popular by the day. Much in the same way that you can search for emoji, Gboard is also great for making finding GIFs incredibly easy.

You can find them in the exact same way you can emoji, too. Tap the emoji button and then the GIF tab. Search, select and send, simple.

If gliding or tapping to type is all getting a bit overwhelming, fear not. The ever giving Gboard is understanding and allows the use of dictation whilst using it.

To turn it on, simply press and hold the space bar and upon release you’ll be able to speak to type. Different users have reported varying accuracy but Gboard dictation is always improving.

If you’re a regular user of Google, you’ll know that the search engine regularly has animated ‘doodles’ taking over the home page. You don’t have to be psychic to find one on a given day. The ‘G’ logo on the Gboard will alert you if there’s something special to look at by being animated itself.

There’s obviously limited space for a keyboard and as such, a lot of characters are hidden from plain sight. Punctuation marks in particular are often missing from the front and this is true of Gboard.

They’re a tad easier to find than in other keyboards. The full stop/period button next to the space bar holds the key. Just press and hold it to be presented with some of the common punctuation marks and simply slide over to the desired one. 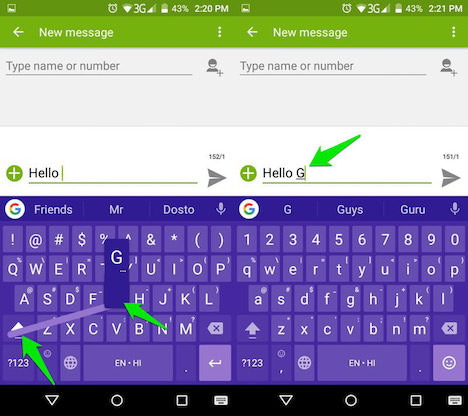 For the folk out there with a massive interest in grammar, capital letters are often the subject of heated debate. Gboard tries to salvage a little peace and makes it pretty easy to toggle words from lowercase, uppercase and capitalising the first letter.
Highlight the word in question and press shift, again and again if necessary. It’ll go through the variants and let you pick the right one.

One of the niftiest tricks of the iOS keyboard makes its way to Gboard. Although it is switched off by default in iOS, you don’t have to go into settings to turn it on for the third-party app.

Pressing the space bar twice in quick succession acts as a shortcut for a full stop/period. What may seem a bit pointless at the start can be a real time saver in the future and something you’ll use every day.

Gboard looks and feels like a built-in keyboard. That doesn’t mean that it has to stay this way. Changing the theme of Gboard is easy and offers many options.

Go to the app itself and select themes. You’ll have the choice of a dark board, landscape and attaching your own photo to the keyboard.

Want to save every possible second? Gboard is more than receptive to shortcuts. For those regularly used terms just tell Gboard that you want ‘ty’ to switch to ‘thank you’ or any other shortcut you want.

There is essentially no limit to what you can do with shortcuts either, meaning that you could potentially save a lot of time in the long run.

iOS users might notice that Gboard isn’t always there when the keyboard is opened. Repeatedly pressing the globe button cycles through the available keyboards but there is a quicker way to get Gboard up. Simply hold that button and a list of keyboards will appear. Swipe up to Gboard and you’re in pretty easily. 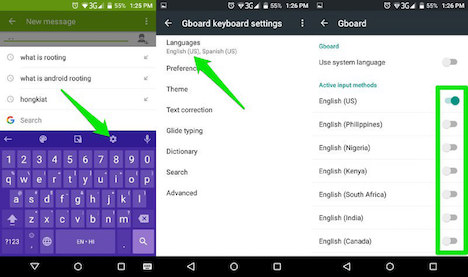 Gboard can handle multiple languages. For example, if you switch between English and Spanish, autocorrect and suggestions are able to toggle between the two with ease as long as all relevant languages have been enabled. There may be a problem with wildly contrasting languages such as English and Arabic which are nothing alike.

Tonia Baldwin is a Director at A1 Connect. The company supplies mobile phones for business of all sizes from SMEs to large corporations.

20 Android Nougat Features and Tips Worth Your Attention

Awesome Gmail Tips and Tricks You Should Not Miss

Top 10 Google Tricks and Easter Eggs You Must Not Miss

Coolest Google Search Shortcuts, Tips or Tricks You Should Know About

20 Microsoft Cortana Tips and Tricks You Can’t Miss Out

Awesome Google Search Tips or Tricks You May Not Know