In our previous post, we’ve showcased 40 creative Facebook Timeline designs and received tremendous response from our readers. Many of them shared their Timeline covers in the comments asking us to add them to the collection. To not disappoint our readers, we’ve decided to showcase another roundup of awesome Facebook Timeline covers, including some designs contributed by our readers. We hope you’ll enjoy this creative and inspirational post like the previous one. 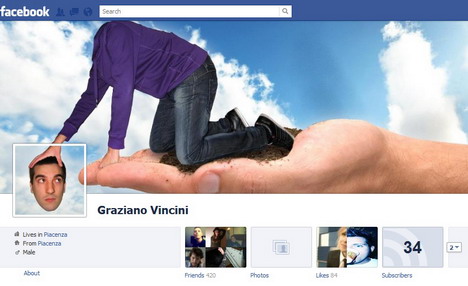 Again, please feel free to share your Facebook Timeline design in the comment section below. We’ll definitely add your Timeline to the above collection if it successfully grabs our attention!
(Image Source: Graziano Vincini – Facebook.com)

Brian A. Fredette
How cool would it be if you’re allowed to show your Facebook Timeline cover to the officer instead of driving license?

Alfredo Tomaselli
Don’t step on me!

Bernard Fisher
Nice use of monochromatic photos on the Facebook Timeline cover.

513art
Behind the lense of camera.

Amber Saenz
Google search the word “Awesome” and see if you can find Amber Saenz?

Cody Cosmo Kelderman
You should be familiar with this famous black and white photograph: Lunch atop a Skyscraper. But, is Cody one of the construction workers lunching on a crossbeam?

Marouane Nouira
Contact photo on iPhone can also be displayed on Timeline.

Saint Clair Family Estate
Nice use of wine label as a profile photo.

Aly Moffatt
Help! Get me out of the washing machine!

Ace Reston
Which one is the profile photo?

Gail David
With some wicked statements and yellow background, you can make an eye-catching Facebook Timeline.

Louise Lundberg
With 800 pixels space of Facebook Timeline cover, you can put many expressions you want.

Krizel Corpuz
A simple and beautiful collage made by several pieces of photos.

Aural Phoenix
Is he trying to fight with eagle?

Mujtaba Jaffari
Jaffari shows his passion about social media and Technology through Timeline.

Hampus Engström
Does anybody can tell me what is he trying to express? Anyway this Timeline cover is unusual but impressive.

Piotr Loj
Loj’s ambition is want to be a great astronaut.

Sune Adler Miltersen
Obviously “diver and shark” theme is a popular choice when it comes to Facebook Timeline.

Joseph is a super fan of Mario Kart!

Angry Bird can be played directly on Facebook Timeline?

Oh no, Winterol is in danger!

50 Most Funny and Creative Advertisements Guaranteed to Make You Laugh