Every teenager knows that almost all mobile phones are divided into “iPhones” and “Androids”. Older people still remember the ordinary mobile phones, “dialers”, and perhaps Symbian and Windows Phone. And where did all the other mobile platforms go? Are there any devices available based on them? Thanks to the efforts of manufacturers, Android smartphones got a great screen resolution and looks like a “spade”. Since the race for the pixels is on, we will point out, what is the maximum resolution and the diagonal of the screen used in phones (tablets do not count) on one platform or another. 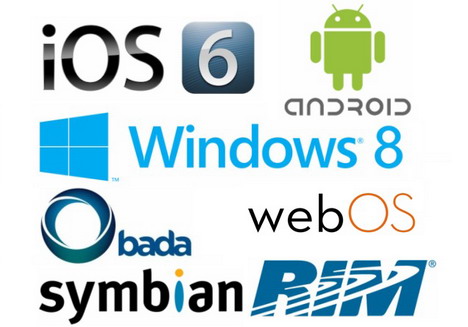 Let’s start with the “iPhone”. The smartphone received a large number of unflattering nicknames (we won’t mention them). The first version of the phone was introduced in early 2007. The operating system iOS has gained great options since, if the first-generation iPhone in all parameters was losing to smartphones on Windows Mobile, the iPhone 5 is one of the most advanced “smart” in the world. By now Apple has sold more than 270 million copies of high-end phones and now it is a regular smartphone, but with a great price. So far iOS devices are only available under the brand name of the developer. The unit of the latest generation has a screen diagonal of 4 inches and 1136×640 points (pixel density – 326 ppi).

Linux based OS was released by Google in September 2007 (sales began in October of 2008) and now it has a leading position in the market of smartphones, now three out of four smartphones sold are based on Android OS. Smartphones based on the Linux operating system are functional and quite easy to use. They are produced by dozens of large companies and hundreds of small Chinese plants. By September 2012 more than 500 million devices (including tablets) are sold worldwide. China sells modified “android” smartphones based on OS OPhone, Baidu Yi and Aliyun operating systems. The diagonal of such smartphones reaches more than 5 inches, resolution – 1920×1080 pixels (FullHD), pixel density – up to 441 per inch (compared to that of the first iPhone, the figure was only 165 ppi).

Operating system that Microsoft is pushing with all the possible forces was released in October of 2010. Despite the fact that Nokia has decided to go to the full release of Windows-only smartphones, the position as the platform and companies that deliver such smartphones are still shaky. The list of smartphones released includes only three and a half dozen from eight companies (Acer, Dell, Fujitsu-Toshiba, HTC, LG, Nokia, Samsung, ZTE). The number of units sold is about 20 million. A smartphone with Windows Phone 7 Screen does not exceed 800×480 pixels resolution with a screen diagonal up to 4.7 inches, with Windows Phone 8 – to 1280×768 pixels at a 4.8 inches diagonal, pixel density is up to 342 ppi.

Once the most popular mobile operating system (in 2009, took 44% of the market) was presented by the Canadian company Research In Motion in 1997, and three years later a mobile phone (initially there were only pagers) was released. The phones used to have a physical QWERTY-keyboard; a feature of the system is encrypted connections that are nearly impossible to “crack.” With the release of new versions of the OS, the touch screens enhanced resolution. Now diagonal display reaches 3.7 inches, resolution – 800×480 pixels, and the density – 284 ppi.

By September of 2012 RIM has sold more than 200 million Blackberry devices of all generations, the number of corporate push-mail service users was 80 million. The number of “blackberries” each year has been steadily decreasing, while in 2012 the sales have even showed some growth. In late January of 2013 the company will introduce a new version of the operating system – Blackberry OS 10 (based on the real-time operating system QNX), and new devices on it. They will support true multitasking, screen resolution up to 1280×768 pixels and a diagonal of up to 4.65 inches (density – 356 ppi or higher). Apparently, the new smartphone may indeed be the “killer” of iPhone and other modern smartphones.

Symbian operating system was produced by a consortium of Ericsson, Nokia, Psion and Motorola in 1999 under the name EPOC, and the first real-symbian smartphone was the Nokia 9210. Over time, Symbian was divided into several branches: Series 60, Series 80, Series 90, UIQ (with touch screens). Subsequently, almost all of them were closed, and there are only one direction – S60, which, after several transformations was named Nokia Belle.

The number of units sold is over 400 million. For a long time, Symbian was the most popular platform for smartphones. Gadgets were produced and sold by the Nokia, Samsung, LG, NTT, Benq, Sendo, Lenovo, Siemens, SonyEricsson and Motorola. Still SonyEricsson devices are being sold, Nokia smartphones also continue to be issued. The latest version of Symbian supported touchscreens with resolutions up to 640x480pixels (but most of all – 640×360), the display diagonal can be up to 4 inches, and the pixel density – up to 325 ppi.

In February 2010, Samsung announced a new mobile platform -Bada. Samsung takes advantage of the largest number of smartphones operating systems: Palm, Symbian, Windows Mobile, Android, Bada and later Windows Phone. In April 2010 the first Bada smartphone was shown, which was sold like hot cakes. Total production of the gadget was over a dozen smartphones (line Wave) running Bada. On the world market the share of the platform is about 3% of all sold smartphones (more than 20 million), one time “badaphones” was being sold better than the device based on Windows Phone. The company says that it will continue to develop the platform. Resolution available is up to 800×480 pixels, diagonal – to 4-inch pixel, density – up to 283 ppi.

Back in 2004 PalmSource announced that its next operating system would be based on the Linux kernel, but only in January 2009 presented the OS – Palm WebOS, and simultaneously announced the Palm Pre smartphone based on it. A distinctive feature of the OS is a true multitasking, the one that modern Oses can boast. In 2011 HP bought the Palm Company, and later moved the OS under the HP name – WebOS. In general there were seven smartphones and one tablet, but the failure of the latter almost forced to stop development of WebOS. Later, the company has opened the source code of the system, but who want to present their phones based on it is not found. The number of smartphones sold barely more than a few million. Smartphone HP Pre 3 got the best screen in the line: 800×480, 3.6-inch diagonal, pixel density 259 ppi.

A lot of other mobile operating systems tried to enter the market as a platform for future smartphones. Some of them have achieved tangible success (MeeGo / Sailfish, Palm, ACCESS Linux Platform). Some were implemented on only a few devices (OpenMoko, Angstrom, Danger). The others did just stuck in a phase of tools setting (PalmOS 6 Cobalt, Azingo).

Modern perspectives of new mobile platforms are very vague: the market is actually divided into two parts (iOS and Android) and several smaller (Blackberry, Windows Phone, Bada), new players will be very difficult to get through. However, even now there are brave souls that challenge the mobile monsters. So, Intel after the epic with MeeGo took a couple with Samsung to promote the new OS Tizen; Nokia had started a project Meltemi, but abandoned, the Mozilla Foundation is developing a Firefox OS … When they are released, everything will be clear what will happen to mobile OS market in future.

This post is written by Katerina, a tech writer from Intellectsoft, an iPad application development company providing high quality services. To find out more or to stay in touch with the team of Intellectsoft team of developers, follow them on Twitter @Intellectsoft.

Why Mobile is the Future and Top 5 Mobile Search Engines