Your smart phone devices are more than just cellular phones, instead one may term them as completely equipped computers. So what is special about smartphones that was missing in the old phones? I’ll tell you briefly. Smartphones these days are characterized by high processors that are very powerful and speedy. Moreover, through the operating system installed on your mobile, it allows you to do almost anything; from placing a VoIP call to browsing and the possibilities are endless. This is where the true beauty of smartphone lies. 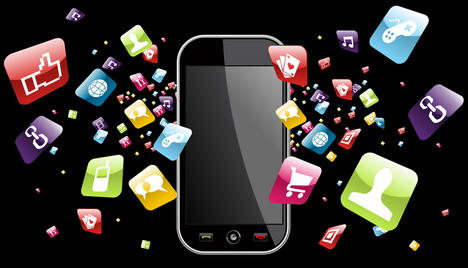 Where the original mobile phones were just plain screens, innocent devices capable of only storing a few contacts, making calls or sending messages in a monotone dull screen; smartphones nowadays mimic a fully functional upgraded computer. Smartphones are easy on the hand through touch sensitive screens and people rely on them so much that they rather keep them in their hands all the time. 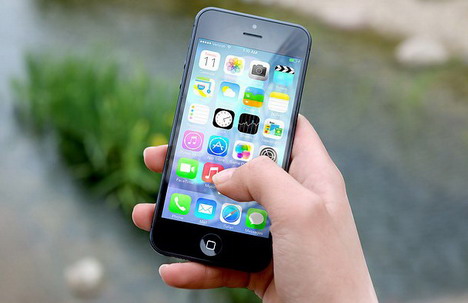 Smartphones come in all types and colors. There are numerous brands out in the market; however only three prominent type of operating systems namely, Android, iOS and Windows. Where many brands such as Samsung and HTC use android based OS, iPhone is the only type that uses iOS. Windows is still fairly new, so we shall talk about the former two (Android and iOS) which together constitute more than 90% of the smartphone industry.

So what makes smartphones smart and special? Not the high processor speeds or the super cool display screens, everyone saw those coming. The real smart things in these phones are the gadgets: The Apps. The programs you run on your phone, the feature these bring to the device in your hand are the heart of the smartphone technology. Now, there are more than 1.3 million apps in the Google Play store alone and even more in the Apple App store and all of these are awesome pieces of technological craftsmanship. I have narrowed them down to some 20 of the coolest and most awesome apps that you must have on your phone. 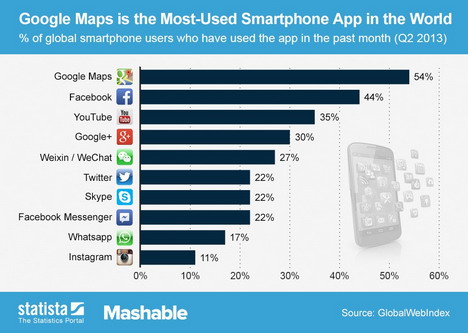 A survey on top 10 smartphone apps.

The survey shown above is one of many conducted to ascertain the apps shown to be most popular among smartphone users. Most of the popular apps are not OS specific, that is to say they work for both types of smartphones. Naturally it is with the most popular apps that I will start my list.

Google Maps
This free app is number 1 on the most used app list, and there is a reason. Google Maps is the most authentic of all navigation apps around. The maps are complete and the app is extremely easy to use.

Facebook
It comes as absolutely no surprise that the app of the most used social network in the world is one of the favorites of smartphone users. People say everyone has a smartphone these days, if that is the case absolutely everyone uses Facebook too.

YouTube
The app of the world’s most popular video sharing website is again a must have for all smartphone users. It is a fact that number of views on a video on this site serve as an authentic measure of popularity and visibility. Hence, the popularity of the app is very high.

Google+
Google+ is an amazing app that allows you to access all your google accounts through one program. Just log in to the app with your google user name and access Gmail, YouTube and much more.

Twitter
No surprise again, Twitter is another mammoth of a social network boasting a large number of official celebrity accounts. So just use the app to keep up with your favorite people.

Skype
Want to connect with your friends? Skype is the thing you need. With Skype’s smartphone app you can send as well as receive free text messages, audio and video files. If you’re looking for a more up-close conversation, you can make a voice and video call.

WhatsApp
To send audio, video, text or picture messages, WhatsApp is probably the best app available. The only price is an internet connection. Once you’re connected, you can send a message to another WhatsApp user anywhere in the world. The app is extremely user-friendly.

Instagram
The perfect photo app, if there ever was one. Instagram not only lets you add various artistic features to your photos but also allows you to share them on various social media. The 200 million user base does is enough evidence of the coolness of the app.

Snap Chat
Perhaps the finest app for graphic communication, Snap Chat allows you to send self-destructing photos to your friends. With the story mode you can knit images together to communicate a long message. Newest updates now allow text messages to be sent too.

Super-Bright LED Flashlight
This app, though not amongst the top rated ones can come in handy many in many situations. The application will turn your phone into a flashlight, with various modes and an on/off switch just like real flashlight.

LinkedIn
The perfect social networking solution for professionals, LinkedIn connects to your phone’s calendar and reminds you of appointments. A premium feature allows users to keep track of who has visited their profile.

Tumblr
The right app for bloggers, Tumblr allows you to keep up with other blogs and manage your own. Text, picture, audio and video updates can be made easily. It is also possible to look at trends which might help you in your own blog.

SoundCloud
This app is the most popular choice of amateur and professional music artists alike. The app has an unlimited number of music files which you can download or listen online.

Evernote
The greatest of all note taking apps available, Evernote is like a digital private diary. It allows you to make text notes as well as storing pictures and PDF files. Once you’ve saved something on Evernote, it’s completely searchable.

Dropbox
Dropbox is an awesome file managing app that you can use to store and edit your file. With a simple account a drop box account can be synchronized on multiple devices. It is a great way to conveniently carry around your files and keep up with them.

eBay
Want to sell something, just capture its barcode with your camera and upload it through the eBay app. The app is also wonderful for browsing and buying things too.

OfficeSuite 8 + PDF Converter
The best app around to manage, view and create MS Office files. This app is the mostly widely used of its type around the globe. It also allows PDF conversion.

Mobile Payment Apps
This is where your smartphone gets very powerful. Imagine paying your monthly bills, utilities and anything you want to buy – through your smartphone. Google Wallet is a prime example of a power app that lets you do all that. But even if you are anywhere in the world, there is a powerful mobile payments applications available for you. Your bank virtually in your hands, it makes financial transactions extremely smooth. Just get it and forget about carrying cash.

Avast
Finally, with your phone being such an important device you need to protect it from harmful content and unauthorized access. Avast is the best safety measure you can take to secure your phone.

It is difficult to narrow it down to 20 apps since there is a whole sea of them; this list has probably excluded some many important apps. I say it again; the list is by no means exhaustive, and there are many more useful apps out there.

Umar Jamshed is an IT expert and a former consultant with The World Bank. He is a graduate of Curtin University, Australia. He works for Boloro which is a mobile payment network.