Updated on July 2nd, 2018 by Quertime Writer in Web Tools

If you don’t already have a computer backup plan in place, now is the time to consider it. Data loss is an expensive issue to fix, if it can be fixed at all. Hard drives fail, offices are burglarized and cans of red bull tip over. There are a thousand things that can cause data loss, but a good backup plan can help you neutralize those risks.

A recent study found that the majority of computer users have no backup plan in place. That same study also found that people are becoming increasingly open to the idea of online backup. The vast majority of us have important files on our computers. These files include everything from digital photos to business proposals.

One of the primary issues people have with online backup is finding a cost-effective solution. If you don’t know where to look, it’s easy to spend too much money for online file storage. The good news is that there are several backup companies that offer unlimited storage space for a flat rate.

The following backup providers all offer unlimited storage space and automatic backups. If you don’t want to deal with performing backups by hand, these companies are the best in the business. They will back up everything automatically on a regular schedule. There’s no easier way to back up your files than with an account at an unlimited backup provider. 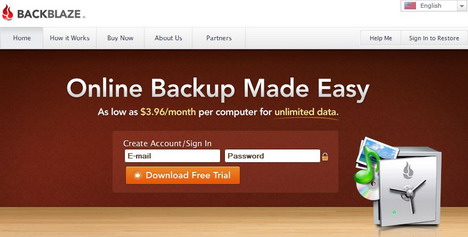 Backblaze is one of the most popular backup websites right now thanks to its simple pricing system and unlimited storage space. For a flat $5 a month (no contract), you can back up everything on your computer. There’s no need to worry about running out of space or being charged overuse fees.

A second benefit of Backblaze is that the software is designed to make backups as simple as possible. When you install the Backblaze software on your computer, it scans your computer for all files and adds them to the backup list. After that, Backblaze will perform regular backups on a schedule of your choosing.

One other thing that I like about Backblaze is its strict adherence to security. Backblaze encrypts your information (including file names) and if you decide to hold your own encryption key, Backblaze can never access your files – even if ordered to do so by the government.

The Carbonite business model closely resembles Backblaze. Like Backblaze, Carbonite provides unlimited, automatic online backup for your entire computer. The biggest difference between the two is that Carbonite costs a flat $59 for a one-year license. This breaks down to about $4.92 per month.

Carbonite also offers premium plans that provide mirror image backups and external hard drive backups. These plans cost $99 and $149 for a year of service, which isn’t too bad overall. If you go with the $149/year plan, you also have the option to receive backups via USB hard drives sent in the mail.

ZipCloud costs a little more than the two options discussed above, but it’s one of my favorite backup services. The reason I like ZipCloud is because it combines unlimited online backup with online file syncing. If you do a little research, you’ll see that very few companies offer both features in the same service.

The file syncing portion of ZipCloud comes with 1 GB of syncing space. You can link as many computers as you want and sync files between all those computers. The syncing space is limited because the “unlimited” backup business model wouldn’t be sustainable if we were able to back up unlimited computers with a single ZipCloud account.

Which One is Best for Me?

You won’t go wrong with any of these unlimited backup providers. If security is your primary concern, Backblaze is the best bet. These companies are all safe, but Backblaze goes the extra mile with its strict security standards and encryption methods.

Carbonite is the best option if you want the absolute cheapest backup plan. You just can’t beat $59 for a year of unlimited backup space. Carbonite is also super easy to set up and will leave you alone after you install the software.

ZipCloud is the best bet for those of you who work on multiple computers. The file syncing aspect makes it easy to get work done on two different computers. For example, you can start a PowerPoint presentation on your home computer and then finish it on your laptop without having to transfer that file manually.

Wes Burns is a tech writer and Internet entrepreneur. He runs a file backup website that revolves around file storage reviews and tech tips and tricks.

Best WordPress Database and Files Backup Plugins for Your Blog

20 Extremely Easy to Use Online File Sharing Tools and Websites

Benefits and Drawbacks of Cloud Backup and Hosting