Posted on January 13th, 2017 by Quertime Writer in Videos 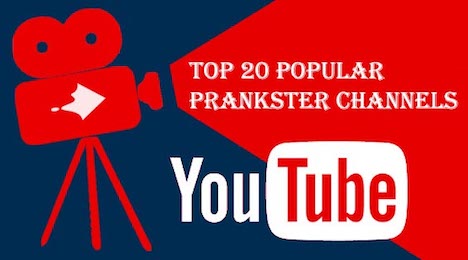 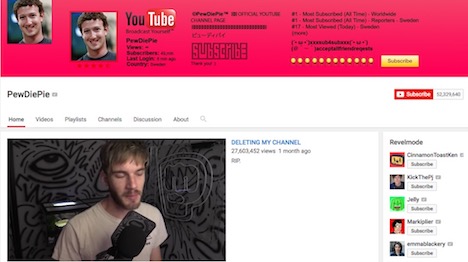 PewDiePie is one of the most subscribed and famous YouTube funny prank channel. The main focus of PewDiePie’s videos is his commentary and reactions to various games as he plays through them. His videos fall under the Let’s Play umbrella. In his early years, PewDiePie was known for playing horror and action video games.

Public Prank is one of the most popular YouTube prankster channels. Most of their pranks are in big crowds. All of their pranks will be more funny and shooted in the tourist areas of Los Angeles, and they also share their feelings with the crowd. In this YouTube channel you can also some scary prank videos. 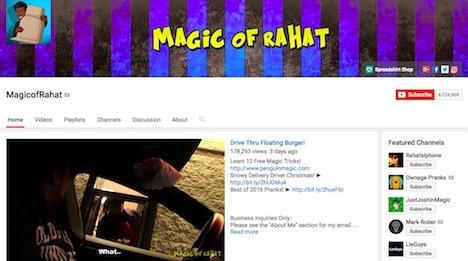 Andrew Gerald Hales is a mastermind of LAHWF YouTube prank channel. LAHWF stands for “losing all hope was freedom,”. All of his prank video contains comedy social interactions. He does some experiments on the social networks and after that he make a funny prank video on it. He has filmed videos around the globe as well as places around the United States, such as New York, Los Angeles, Colorado, Idaho, Miami, London and others.

Roman Bernard Atwood is an American YouTube personality, comedian and vlogger. He used to post some unique funny prank videos on his YouTube channel “RomanAtwood”. It has more than 10 million subscribers and all videos are loved and mostly viewed by the users. Crazy Plastic Ball Prank is one of the most viewed video of this channel. This video has more than 81 millions views.

Jack vale films is another good YouTube pranks channel. Vale works mostly with hidden cameras, makes some strange noises and capture the reaction of the peoples. Vale is a family man who pranks people for a living. He also does some nonsense pranks in which he’ll try to speak nonsense with a stranger. He calls his pranks “Pooter” pranks. Many of his pranks are completed in Huntington Beach, California.

Vitaly Zdorovetskiy is a Russian-born YouTuber and his YouTube channel name as VitalyzdTv. It is another most subscribed YouTube prankster channels. Vitaly Zdorovetskiy has some wonderful ideas on which he make some amazing funny pranks. In 2012, Zdorovetskiy received his first significant success, with the video “Miami Zombie Attack Prank” Inspired by the cannibal attack of a homeless man in Miami. 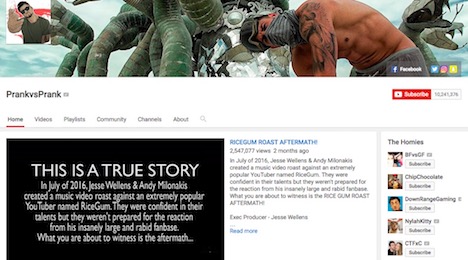 PrankvsPrank, also known as PvP, is a YouTube channel created by “Jesse Michael Wellens” and his girlfriend Jennifer “Jeana” Smith. In this channel they post some crazy pranks, couple pranks, and public pranks. They called themselves the Craziest YouTube Couple. This channel has more than 10 millions Subscribers.

In this YouTube prankster channels you can get the most funny and amazing prank videos. It is a good prank video YouTube channel with most popular and original pranks, filmed vlog style. Dennis Roady does some funny pranks and upload it on this channel for his fan and entertain all of them with his funny prank videos. 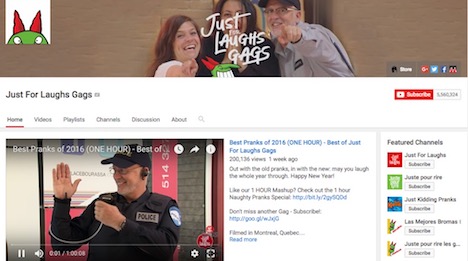 Just for Laughs Gags is a Canadian silent comedy/ hidden camera reality show that is under the Just for Laughs brand. It is a full funny YouTube prank channel loved by users. In the opening of each prank, the actors introduce how the prank was done and how it will be shown as well. The best part of silent comedy is no need to language, anyone can easy understand the prank and enjoy it.

Rémi Gaillard is a French prankster who upload videos on YouTube and make fun with others. It is world famous for its dangerously funny prank videos. He makes all of his video with his creativity and known for his prank videos. Recurring themes include dressing up as and interpreting the behavior of various animals in public. 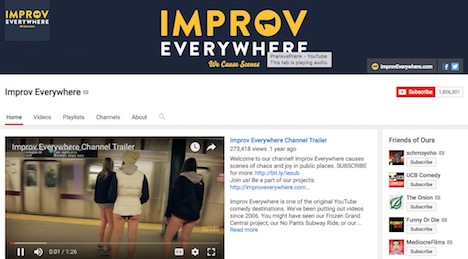 Improv Everywhere is another one of the funny prank YouTube channels. It provides original and comedy prank videos to his fan. One of the most popular video of the Improv Everywhere YouTube prankster channels is “Frozen Grand Central”, which has received over 35 million views.

Ed Bassmaster is another YouTube pranks channel where you can get funny prank videos. It runs comedy videos where, as various characters as Teste, Skippy, Gerard Douche, a CIA agent, Hacker, Tequila, Mumbles, Bluetooth Man, Ugly Face, Bushman, and Zombie face. He pranks people or puts people into awkward situations.

Mediocre Films is popular YouTube channel where you can get funny pranks. It’s all about having fun and making people’s day better. Its first video, “Coming Home”, was selected by Amazon.com as one of the top five videos of the Amazon. This channel is managed by Gregory Charles Benson and all video is made by him with this creativity.

Stuart Edgington known as Stuart Edge is an American YouTube personality. He is best known by his pranks videos, magic tricks, and flash mob videos. It has more than 2.5 million subscribers, and provides better funny comedy prank magic videos. Most of its videos involves a magic tricks, you can also enjoy magic with comedy pranks at this channel. 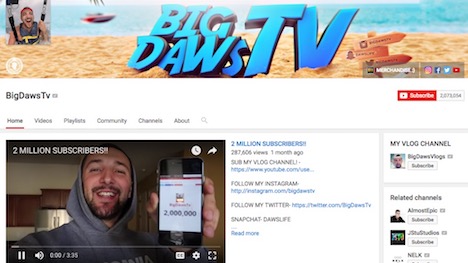 BigDawsTv is another good YouTube prankster channels where you can get some amazing prank videos. It provides some good pranks and comedy social interactions. In 2014 it was released a video titled “Giving to People Who Give” which was filmed in Tempe, Arizona.

Danny Duncan is a new YouTube prankster channels which post most new and creative prank videos for his fan. You must enjoy its video and laugh after watching the video. Danny Duncan is a YouTuber from Florida who known for his prank videos, it has more than 500,000 subscribers.

Chris Chann is another popular YouTube channel for prank videos. Christopher Chann is the owner of this channel he is from Los Angeles, California and posted more interesting funny prank videos on his channel. He uploaded his first video on YouTube named as “Untitled” it was the recording of President Barack Obama and then he started post his prank and funny videos on his YouTube channel.

AmazingPhil is a good prank videos YouTube channel. Philip Michael “Phil” Lester from British is the owner of this channel. He shares his strange life with his fans through internet. He post his first video as titled “Phil’s Video Blog” in 2006 since then he upload more funny prank videos on his channel. It has more than 3.9 million subscribers and everyone enjoy its funny videos.

Rajat is a foodie, blogger and football lover. He blogs at www.onlineandroidtips.com.