On the Internet, there are a lot of slangs and phrases that you would come across in your routine browsing/surfing. The internet is a place where things overnight turns into a sensation. This article is intended to make you aware of the trendiest ones out there. 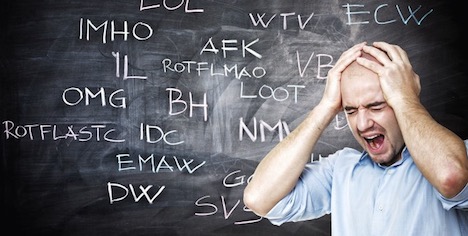 AMA: Ask Me Anything
Ask me anything is a series that was started on Reddit. It was meant for the concerned authority to respond to open questions on a variety of topics. And with time AMA became the trending slang all over the internet. Whenever someone was having a public Q&A they would term it as AMA.

Bae: Babe/Before Anyone Else
Although, it is a Danish word listed on Urban Dictionary meaning poop. Yes, poop! But the internet has taken it as an acronym for ‘Before Anyone Else’ or short for ‘Babe’. Later you saw these words being adopted into lyrics such as Miley Cyrus’s number where she says, “Come get it, bae”, meanwhile other pop stars have also incorporated this slang into songs.

Memes flooded the internet with the word “Bae” and was even used in image captions. It was meant to mock.

DAE: Does Anyone Else
A prefix for a question which implies that the asker of the question is interested in knowing that is he the only one or others also know of a situation or thing he is going through or facing. On Reddit, and other discussion platforms, it is quite commonly used but on the whole, it is not very often used on the internet.

Dafuq: What the F****?
Dafuq is short for WTF on the internet. I don’t which is shorter a three letter acronym or a five letter slang for a slang word. Anyway, this the word that the internet has coined up and is popular among masses. So, if you weren’t aware of it then there you go!

DM: Direct Message
DM feature of Twitter lets you directly send private messages to your friends/followers and the other way round. It is usually for when you don’t want something to be shared publicly but want to stay within your squad or between the two of you, for that matter. DM has largely been replaced by “PM me” on the internet, meaning, privately message me.

ELI5: Explain Like I’m 5
When the explanation or elaboration required is a tough nut to crack, you will have to break it down for that person as you would for a five year old. Normally used when talking about subjects revolving around science and technology. In other words, describing in layman’s terms.

FML: F**** My Life
Often used to express when something bad or unfortunate event happens to you. The words are as old they come but sharing the incident while hash tagging it with the words FML have soothing effect on your conscience. You can also check FMyLife site, where can anonymously share your grief-stricken stories.

FTFY: Fixed That for You
The phrase can be used in two ways. The first one is where you literally fix something where you have made a mistake. In other words, rectifying your error. The other use, however, is sarcastic where you point out the flaw in someone else’s writing, say, in their Facebook comment by re-writing the correct version followed by FTFY.

Facepalm: “Ugh, idiot”
When someone you find over the internet that has done something stupid and to convey your disappointment, disapproval, ridicule or dismay you only have one choice where your palm hits your own face/forehead is called facepalm. It is used enclosed in asterisks *facepalm*.

HIFW: How I Felt When
Another acronym that is used to shrink words. Often used with an image, video or a GIF.

ICYMI: In Case You Missed It
One of the few times when the internet tries to be polite. So you politely state if someone you are not sure have had access to certain information, you share that piece by writing ICYMI.

IDGAF: I Don’t Give A F****!
Quite a proclamation and emphatic way of saying that you don’t care at ALL.

IMO/IMHO: In My Opinion/In My Humble Opinion
A safer way to voice your opinion instead of projecting as it were the universal truth you are speaking. Both are respectful ways of getting your message across because internet is a vicious place always ready to pick up a fight or engage in war of words.

IRL: In Real Life
Internet is a virtual space and you maintain a different persona when you are online so when you are talking about things in real life a qualifier in the form of “IRL” would suffice and people would know that the s*** is real.

JSYK: Just So You Know
FYI or for your information is getting obsolete. You should switch the newer version of it by saying Jsyk when schooling someone.

Lulz: For kicks
To get the excitement out of the situation, you use the Lulz. In actual, it is an offshoot of LOLs but is not the substitute for it. So, when you are in the mood for just for laughs, you can Lulz.

MFW: My Face When
Similar to HFIW above, it is used in conjunction with some image, video or GIF to convey your facial expression so it is imperative that it is a face that you use. Its variants include MRW: My Reaction When and MIRL: Me in Real Life.

NSFW: Not Safe for Work
If you are in office by labeling something NSFW you should steer clear of that link, video etc. as it will not be an appropriate environment to access something that has nudity, graphic language or pretty much everything that includes anything offensive.

NSFL: Not Safe for Life
While NSFW is used for formal environment but NSFL means that even if you are in a casual environment you should not access that link even then or it will scar you for the remainder of your life.

PAW: Parents Are Watching
A kids’ slang when they want to signal to one of their friends to refrain from an activity for the moment because their parents are around and may be watching. It’s more like heads-up to lay low for the time being. “Code 9” is also being said to have been used in place of PAW but it isn’t that popular.

SMH: Shaking My Head
SMH is used to convey your disappointment at someone who’s done or said something downright stupid that all you could is shake your head at that person’s idiocy.

Above are the finest of the finest slangs, phrases and acronyms used widely across the internet.