Social Media Myths and Truths Every Digital Marketer Should Know

Posted on December 7th, 2013 by Quertime Writer in Social Media

It’s been a decade since social media became mainstream. While the invention of Internet and social media, in particular, has made life easy for many business developers, there is still a lot of ambiguity about the real power and usefulness of social media. Here are presented some myths and truths about social media backed by extensive findings from experts. 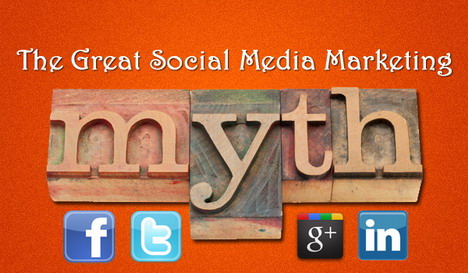 There was never much doubt about the power of networking for business growth. A good network supports a healthy discussion, creates positive buzz about a product, increases sales, finds new customers and makes a fortune on the bottom line. This is what marketers normally are hired for; to build a good network. As Internet arrived on the scene, marketing professionals became familiar with its superior capabilities and within no time digital marketing became the next buzzword. Come 21st century and Web turned into Web 2.0, with social at the heart of the raging Internet revolution which was about to engulf the entire world.

Blogging was the first invention of the social era, after which social media began to explode in popularity. MySpace and LinkedIn were the early risers, gaining prominence in the early 2000s, niche sites like Photobucket and Flickr popularized photo sharing which served as the basis of the soon-to-emerge social media giants like Orkut, and Facebook. In between, YouTube made its debut in 2005, providing an entirely new way for people to communicate and share with each other with videos. Today there are “n” number of social networks each holding on to its own, impacting our digital lives in some way or the other. Over the course of time, digital marketing guys have found methods of utilizing these networks to the benefits of their business. However, since the Internet is a very rapidly evolving industry, with changes happening every moment scores of myths surround the phenomenon of social media.

Myth: There is No Such Thing as Social Media ROI

There is no longer much suspicion left about the good that social media can do for your business. If nothing else, the presence itself provides visibility and connectivity, enough to convince big business owners to invest resources in this form of marketing. However, small and medium business enterprises are still yet to be convinced of its power, mainly because they believe in the myth that social media doesn’t provides any actual ROI. Nothing could be further from the truth.

Social media creates leads and inspires new customers. Though quantifying social media ROI might be a complicated but not impossible. Facebook provides a tool, Conversion Measurement that allows those who advertise on the platform to record the behavior of those who click on ads. Analyzing interactions like the number of likes, comments, tweets and retweets gives an accurate idea of how far your message reached. Plus, your website’s analytics will tell you what percentage of your website’s traffic is coming from social media platforms.

Your job description might only require you to work from 9 to 5 but social media ticks round the clock, 24 by 7. There is no definite time when your target audience will view your post. Make it a point to engage with users during off hours as well. With the explosion of smart devices, internet users have access to social media sites 24 hours a day. That effectively means that your followers might check the feed anytime. It doesn’t means that you have to post at all hours. It simply means that engaging with users beside the regular hours might actually better results for your business.

Myth: If It isn’t Viral, It Might as well Not Exist

While viral marketing is central to the theme of social media marketing, measuring the success of your efforts through this one parameter is not only unfair but also inaccurate. There is no doubt that viral campaigns are easily the most successful, but social media isn’t all about a big one-time hit. Instead, the success of your social media initiatives should be measured by the amount of trust and goodwill they has been able to generate over a course of time for your brand or product. Not easy to create, but the best campaigns are interesting and unique and worth sharing amongst the friends of friends, adding value over time.

While there are scores of more myths, let us concentrate on some of the tried and tested facts about social media marketing.

Truth: Social Media Works for a Wide Range of Demographics

Facebook started as a site for teens. However as its user base grew exponentially, other age groups also joined the site. A recent survey (2012) revealed that 56% of Internet users who are over the age of 50 use Facebook. Similar stories for other networks such as Twitter and LinkedIn make it clear that social media is not limited to any particular age demographic. The usage pattern might vary, but clearly you have got the audience and it is up to you make the most of it.

Social media is not just a fun thing anymore. The conversation going on across different platforms is responsible for generation of new useful ideas, provides inspiration and prompts action. There have been countless instances when social media campaigns have led to a series of actual events. From a marketer’s point of view, nothing is better if the communication with his audience is able to convert into action. Known as Call to Action in the marketing lingo, social media plays an important role in generation of the same.

Between the rising growth of social media adoption, its proponents are already making brave predictions about social media replacing as search engines as a primary source of information for consumers and business buyers. While research does tell us that the rise of social is swift and growing, it simply hasn’t evolved half as much as to provide the answers that one looks for while putting up a query in search engine. You can ask for a restaurant recommendation on social network but when it comes to finding out actual data about the restaurant’s location, physical appearance and reviews, search engines is what comes to mind. Search and social work together, but by no means one replaces the other.

Saurabh Tyagi An engineer by qualification, but destined to be a writer, Saurabh Tyagi has spent last four years of his life closely observing and working within the online marketing industry. His written works on topics like jobs in Facebook, Internet marketing trends have been published on leading online blogs.

Dummies’ Guide to Social Media Marketing – How Get Started

How to Strategize Social Media Marketing to Boost ROI