The age of face-to-face communication is long gone and we all know that. The immense technological growth spur has rendered it moot, as it’s a lot easier to talk via Facebook, Skype, WhatsApp and other sorts of online communication channels. If it’s a good thing or not, that’s for future generations to decide. And building on that premise, the age of written communication is dying as well.

Texting has become a commodity that we can’t live without (though we’d rarely admit it). Everything started with word shortening (due to character constraints). Before you knew it, acronyms were being used on a daily basis. Texting has become such a part of our daily lives that businesses even decided to employ them as an effective means of communications. So alongside acronyms, SMS messages began showcasing buzzwords in hopes of landing clients (they didn’t).

But the crowning jewel of instant communication was the use of images. There simply are some things that you just can’t say it with words. So why not go for a cheeky banana-eating minion? Emoticons soon developed and they are now widely used. So let’s see the best and coolest 20 emoticon apps out there.

It’s available on Google Play and it’s an app that has actual memes you can use. You get Derpina, face palm, the cereal eating guy, the rage guy, just about all of them. This one is designed for all the 9gag lovers out there who know and understand the world of the original memes. But don’t worry, it has normal emojis as well (mind you, there’s a clear distinction between emojis and emoticons).

2. Neon Emoji Keyboard Emoticons
This one turns your keyboard a cool neon green, making it look like you’re writing on some device from The Matrix and not just your phone. It has an astounding 4000 items database. It supports more than 60 languages and over 3000 keyboard themes. All free.

3. Minions Emoji
A very current, cute and loveable one. Let’s not kid ourselves: everyone loves the minions. The world fell in love with the mischievous yellow monsters after the release of Despicable Me and hasn’t let go since. The minions also got their very own movie this year, so we love them even more. Interesting and adorable to know, the words that accompany this app’s emoticons are in the minions’ language. But don’t worry you’ll understand it!

4. Emoji Keyboard-Paris, Emoticons
The word to describe this app is ‘beautiful’. It comes with 3000 emojis, emoticons, faces, stickers and texts, but also with over 100 amazing themes, a number which will continue to grow just for you. So why not look at beautiful Paris by night while texting, for a change?

5. Christmas Emoticons
No list would be complete without a Xmas app. Here is a quite beautiful and exhaustive one, with very well rendered emoticons in a large database, which will help you spread joy this year with a lot more ease. It includes all the classics, like Santa, wreaths, gingerbread, trees, reindeers, presents, stockings, snow-flakes and so on, in many, many varieties.

Here’s one for everyone who’s in love. An entire app dedicated to kissing. And it sounds pretty yummy. You get to choose from all sorts of pouty and kissy red lips and cute emoticons, like rabbits kissing in the rain under a huge umbrella. How romantic!

7. Rose Emoticons
Emojis are an excellent way to express one’s romantic side, so why not try this rose app? It’s basically a collection of rose icons that will help you send the right message to your loved ones. Roses are the messengers of love, after all.

8. Troll Emoticons
Probably one of the funniest apps out there, for those of you who master the fine art of trolling. With this one you get all the classical rage memes, as well as the newer ones, like the guy from Ancient Aliens, ‘sudden-realization’ Keanu Reeves, Bad Luck Brian, Toy Story’s “everywhere” meme, ‘first-world-problem’ chick and so on.

9. Angry Emoticons
Yes, there’s a special app for when you’re feeling like you want to destroy everything in sight, filled with emoticons expressing one single emotion: anger. Of course, one cannot help but wonder, is there a need for such an app? You be the judge!

10. Holiday Emoticon Package
Circling back to the holidays, here is an app that has emojis and emoticons not just for that one supreme holiday, Christmas, but for all the other ones as well, including your birthday. So you get to choose from a range of traditional holiday emoticons, as well as huge flower bouquet ones or Happy New Year fireworks ones.

11. Color Rain Emoji Keyboard Skin
The effect that this one has after you install it is quite cool. It basically turns your emoticon keyboard and your theme into a pretty, rainy one. It has over 3000 emoticons, emojis and stickers, over 100 themes, auto correct and smart gesture types.

Yes, you heard it well. For all you Ikea aficionados and Swedish meat ball lovers, there’s an app just for you. The idea their creators banked on when they introduced it was that you cannot possibly get offended when you’re told to clean up the house if you’re told to do so via a cute Ikea emoticon. The same goes for watering the flowers, feeding the cat, washing the clothes, picking up your socks, or even cleaning up the toilet. So prepare for your wife’s nagging in Ikea emoticon form!

13. Emoji – Photo Grid Plugin
This is one app that allows you to paste some stickers, emojis and emoticons onto your pictures. So if you feel your pics are missing that certain je-ne-sais-quoi, download this app and start collaging away.

14. Stickers for Facebook
This one was especially designed for the Facebook chat. You get to choose from a variety of funny stickers, love stickers or memes. You also get emoticons in the shape of teddy bears and different famous characters, like Betty Boop or Dracula. It’s good to know that it also works on What’s App. 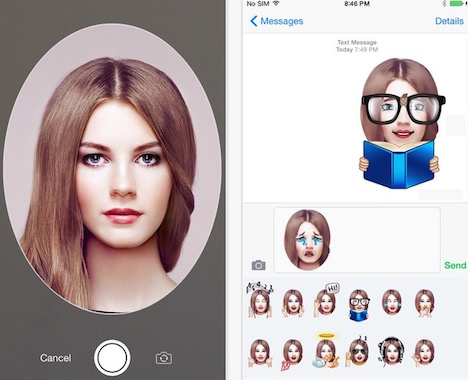 This particular app is available only for iOS and what it does is that it transforms your face into an emoji. Meaning that you have to take a pic of yourself and the EmojiFace will automatically transform it into an emoji, with different expressions and attitudes. Plus, you can use it directly from your keyboard.

16. Flirtmoji
An app specifically designed for adults and their dating and flirting needs. Be careful, though, some of these can get really racy, way beyond the line of flirting. Also, remember that they are not safe for work, so be careful when and how you use them. There are 6 themed collections for you to choose from, each at $0.99 each. 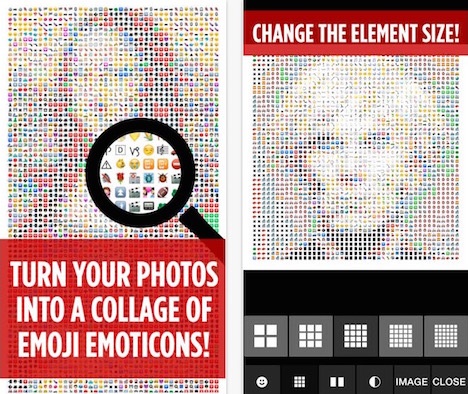 One of the coolest emoji apps out there, this one turns your photos into a collage of emojis. This means that you upload a picture of yourself and the apps converts the pixels into emojis. The interesting thing is that the art resulting can be exported at up to 16 MP, so if you decide to print it, it will be at excellent quality.

18. The Fashion Week Emoji App
Created by Harper’s Bazaar in collaboration with Crush Creative, this truly one of a kind app allows you to liberate the fashionista in you. Emojis range from the face of Karl Lagerfeld, to leather jackets, nail polish, lipsticks, Chanel purses, pumps, the Olsen twins. You name it, they have it.

19. Basketball Emoji Camera
You love basketball? We have the app for you. It’s actually a very fun photo editor app, which will allow you to paste basketball related emojis on top of your own photos. You get Lebron James, Lance, Shaq, The Answer, Kobe, Black Mamba, Dirk and much, much more. It’s very easy to use, you can resize or rotate the resulting picture for a more realistic effect and you can add a caption if you desire to post it on Facebook.

20. Love Emoticons
Here is an app for really romantic people, who want to demonstrate their love not just through words, but via images as well. It’s designed to make your chat sessions even more romantic than they already were. You can choose from different categories, such as Emoji, Love, Rose, Romance and Heart. You also get the classical emojis, as well as a collection of stickers featuring kissing couples.

It’s almost impossible now not to find the app for you as far as emoticons go. There are hundreds of them out there, these 20 being just the coolest. So there is, basically, no emotion you might ever want to share with someone that you don’t have a channel for.

Helen Daniels is a professional writer for TextMagic. She is also a self-proclaimed Twitter addict with an uncommon passion for social media marketing and alternative marketing strategies that help with small business growth.

15 Tools and Apps to Create Your Own Emoji