Posted on January 31st, 2018 by Quertime Writer in Cryptocurrency

Cryptocurrency being the talk of the town is changing how the currency has been perceived and transferred as well as a new mode of investment for exceptional profits. Over the last year, Bitcoin prices saw a crazy hype reaching the highest point of $19,783.06. 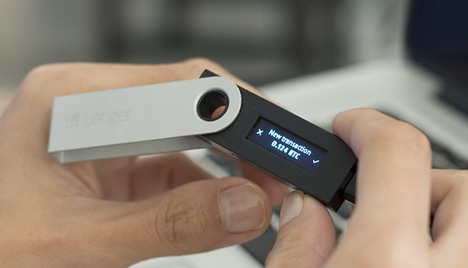 A year ago, not even 2% of the people of the World knew about Cryptocurrency; why they are used; how to purchase them and how to secure them? And today, it’s one of the most popular payment method and investment model people are looking at.

There are three types of wallets available on the internet to secure Cryptocurrencies, and these are as follows:

1. Hardware Wallets, which you can physically carry anywhere.
2. Software Wallets, which are the ones you download and use on your digital gadget whether its smartphone, tablet or computer.
3. Last but not the least online wallets, which can be operated on the web from any device connected to the internet.

Let’s list down the most trusted name of the industry for each category one-by-one.

Among the first in the list, Trezor is the most trustworthy option to store your Cryptocurrencies. It’s a USB connected device wallet that can easily store, receive and send Cryptocurrencies. Everything that you need to control your cryptocurrency is in the palm of your hand, which is waterproof, and extremely durable removing everything that can be easily hacked. Without physical approval, transactions are impossible to do. With every transaction, detail has been displayed on the screen requiring the final confirmation. 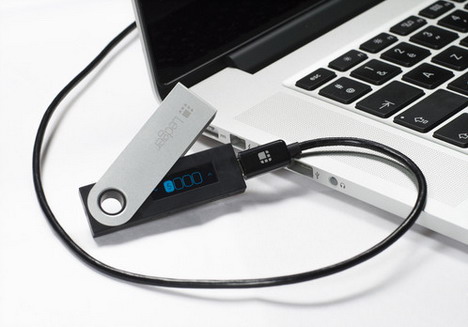 Coming down to Ledger Nano S, it’s a smartcard-based hardware device. Regarding its hardware and design, Ledger Nano is a compressed USB design based Cryptocurrency hardware wallet. It can be used on any computer as the setup uses the ‘Ledger Chrome Application’ and most Android phones containing GreenBits or Mycelium. A 24-word seed is created while the initial set up and is backed up offline in writing on a piece of paper. The uniqueness is the ‘Seed,’ in case of any theft or loss, the wallet can be re-created from scratch using the seed as a backup. Furthermore, mostly the computer is the point of failure, that’s where Ledger Nano provides an extra layer of security avoiding thefts. 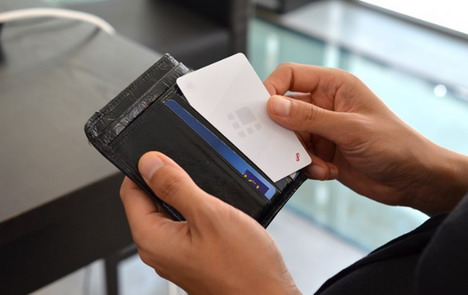 Unlike Ledger Nano, Ledger Unplugged is a wireless hardware wallet, the size of a credit card. Regarding security, the size of the wallet makes it safe, as it can be carried in a wallet or purse without catching much attention from anyone. It differs from other wallets as it uses NFC technology to communicate with other devices. 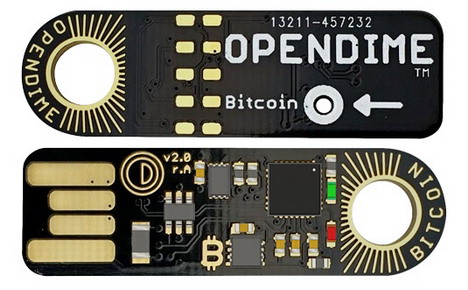 Compared to other wallets OPENDIME is a small USP stick and the first Bitcoin Bearer Bond which can be spent like a typical currency note. Compatible with any device whether it’s a laptop or phone while generating a private key inside the device not visible to anyone, not even the bearer of it. Its hassle free, you just have to hand it over to anyone you want without any charges or costs incurred. With USB connectivity to check balances through any device being cheap as anything available in a pack of three. 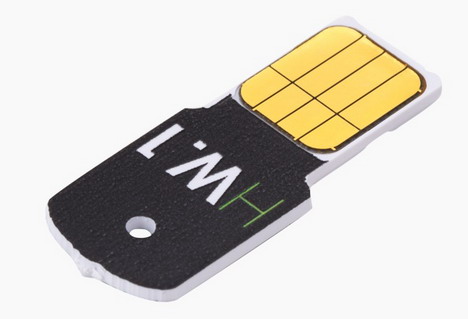 If you’re low on the budget than no need to worry, Ledger HW.1 has you covered. Ledger HW1 is a smartcard hardware wallet for group and team needs making it a secure Bitcoin wallet for multiple transactions. Moreover, if you’re familiar with the Ledger Nano than Ledger HW.1 is the more affordable version of it.

Users are quite picky when it comes to online wallets, and the most trusted name in this category is Mycelium since it’s an HD wallet with advanced features letting you send and receive Bitcoins in the fist of your hand on a cellphone. What’s impressive is it secures your funds until they are ready to send and receive with the unparalleled cold storage functionality.

Like every wallet being a perfect fit, Airbitz is for those who have problems understanding HD seeds and backing up methods. Not very often does Cryptocurrency Wallets provide discounts but Airbitz being affiliated with Fold, it gives a 20% discount on Starbucks by using the wallet. 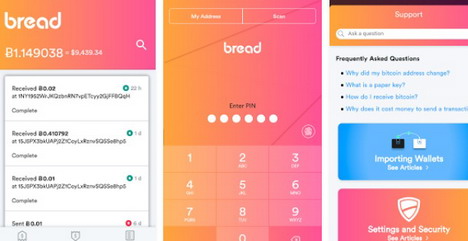 Being the first stand-alone iPhone Bitcoin wallet, it’s available for Android as well. Designed to protect from significant security loops and physical theft, including code signatures and AES hardware encryption. Breadwallet is the ultimate choice for Android wallet connecting you directly to the bitcoin network. 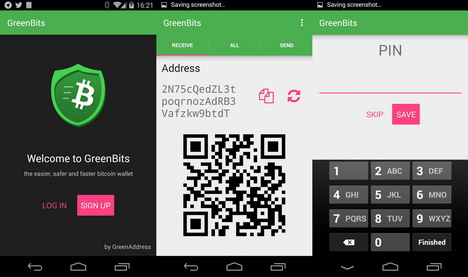 GreenBits is said to be an easy to use wallet and fast when it comes to transactions. It’s a native version of the impressive GreenAddress supporting hardware wallets like the Ledger Nano and Trezor. Includes two-factor authentication and simplified validation making it a prime choice. 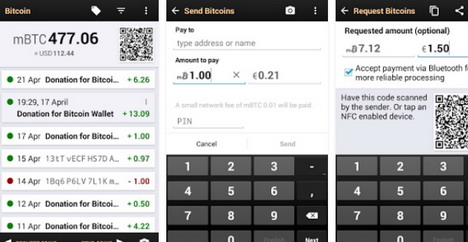 Being the first ever Bitcoin wallet for Android, it serves a good purpose when it comes to functionality. It’s simple to operate, uses a QR scanning code to send and receive payments securely.

SpectroCoin is a wallet for Bitcoins bringing in a wide range of features to counter Bitcoin e-wallet. In short, a one-stop solution for Bitcoin. Allows the users to maneuver between emails and the Bitcoin network for transactions easily. Provides a user-friendly layout and most important you can now apply for IBAN and a credit card, giving it a niche among the rest.

GreenAddress is a multi-purpose Bitcoin Wallet allowing you to use apps on Android, Chrome, and iOS. It enables the user to receive strong security and accessible platform to perform multiple dealings. 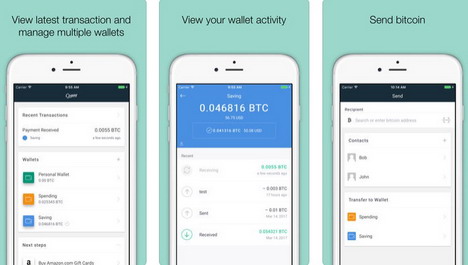 Want a wallet which is suitable for all devices? Copay have you covered. Since it’s the only wallet which is available on multiple platforms, making the user experience great. While a single account can be used on numerous devices removing the stress for making several accounts compatible with each device.

Being available on the App store it’s the easiest to use bitcoin wallet for smartphone users which guarantee users to gain the benefit of a secure and encrypted digital transaction. Privacy being a significant concern in cryptocurrencies, Airbitz decentralizes reliability and secrecy as a topmost priority.

Just as the breadwallet Android, breadwallet iOS focuses on important security and encryption, providing the same simplicity and simple design that your entire transaction details and history can be easily maintained and restored.

Bitcoin Core comes under the umbrella of the official Bitcoin client/wallet. It offers better privacy as it doesn’t depend on date coming in through external servers or networks, providing a smooth transaction process. Not popular among the users due to speed lags, yet ceases to maintain its repo in terms of keeping a copy of the entire blockchain.

Created by UK based developer, it promises to offer a straightforward UI, easy setups, Trezor and KeepKey backing. It allows users to open multiple wallets instantaneously with official support for more than 40 languages.

When it comes to securely doing transactions, Armory gives a strong and extensive control to users in storing private keys. Even for transactions worth millions or billions, Armory is quite adequate and can set up offline signing process.

Electrum is known for its fast speed transactions and ease of access provided by the wallet. Nonetheless, multiple features are offered such as connecting to Tor, integration and hardware wallets making it a complete package for a broad spectrum of users. Moreover, it verifies if the transaction is on the Bitcoin Blockchain.

Universal Wallet – That Works On All Platforms

Last but not the least Copay (wallet by BitPay) being reviewed before comes under the category of being a universal wallet, why? Because it’s the only wallet which has the capability of being run on multiple platforms whether its iOS, Android, Windows Phone, Mac OS X, Linux and many more. You name it, and Copay will work on any operating system.

Coming down to choosing the best among the three categories. We have done extensive analysis, and we have reached this conclusion that based on security, ‘Hardware’ wallets are more vulnerable to threats due to having a physical form. It can be robbed and snatched with all your investments on Cryptocurrency. The most secure option is online wallets as they are secured by encryption and additional security can be added via 2-Factor Authentication.

So that’s our take on the all the top most secure Bitcoin and cryptocurrency wallets available today. We also need to understand the fact that these cryptocurrencies were primarily founded and aimed to work as a secure payment method. With increasing data theft incidents, privacy and security of Internet users is always at risk. From financial transactions to other uses of Internet, we should always be worried about our privacy and data. And for that, applying necessary measures is always be on top of our list. In case of online privacy, using services like proxy and VPN is a good step. Adding a top VPN to your mobile wallet is preferable a wise decision as it comes with advanced encryption, however, you can always use a reliable proxy to secure your digital identity and access geographically-restricted websites.

Author: Hanna Nicholson
Hanna Nicholson is a nerd by profession and wanderer by fortune. She has graduated with honors degree from University of Wollongong majoring in Cyber Security. Hanna loves to take part into discussions, she is an active user on Quora and currently writes for ReviewsDir – a tech review website.