Updated on December 26th, 2014 by Quertime Writer in Mobile

As the proud owner of an Android smartphone, you might be indulged in performing a lot of tweaks for your device’s features and functions. Well, it’s actually nice to jailbreak your smartphone, but doing the same comes with a certain amount of risk. A large number of mobile device users have lost their vital data in the wake of customizing their device for an improved performance.

Well, in order to save you from falling prey to any such situation, I’ve written this blog which makes you familiar with some easy-to-follow steps that would aid you in backing up all your smartphone content via your device itself.

Why to backup your Android smartphone via the device with zero rooting?

Whether you intend to backup and restore your contacts, SMSs, music files or applications, Android renders you the flexibility of doing so in a thoroughly hassle-free way. You can opt for a complete data backup with the help of your Android device. With an easy access to a wide range of tools and solutions, the process of Android backup becomes a fun-filled activity. The very popular Simple ADB Backup has emerged as a head turner when it comes to taking a complete backup of an Android smartphone. 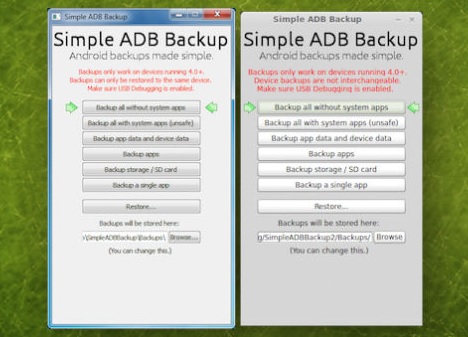 ADB(Android Debug Bridge) Backup is an app that has been developed by XDA member omegavesko and uses Android 4.0+’s native backup facility. Plus, you can gain access to Android Debug Bridge that will allow you to save a snapshot of the Android device, offering you a remarkable GUI for performing a complete backup of all content that has been stored into the device. With ADB(Android Debug Bridge) is a tool that allows you to send numerous terminal commands to your smartphone, while debugging is enabled on your gadget. Some of the major commands sent to your device include: basic Linux shell commands, developer commands and many more. The best part of ADB is that it can be used for sending terminal commands to a variety of un-rooted devices.

Currently available for only Windows and Linux platforms, ADB Backup doesn’t require you to root your device in order to undertake a data copy process. Surpassing the popularity of some major alternatives like My Backup Pro and Titanium Backup, Simple ADB Backup serves as a complete bliss for all those Android smartphone owners who aren’t inclined on rooting their device but still want to enjoy complete data security. Backed by an easy-to-use interface, ADB app is easy to navigate and includes big buttons which indicate its purpose in the most effective style. In order to gear up with using ADB for Android backup, you need to set up ADB on your machine, followed by enabling USB debugging on your device. Although, ADB is still available in its open beta version, Android users haven’t felt reluctant in embracing the application for their smartphones. 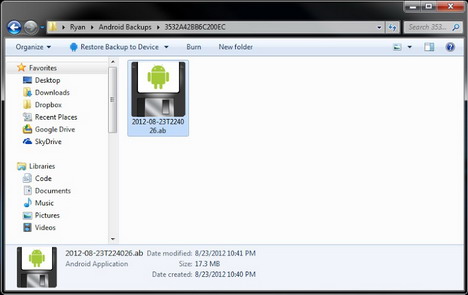 In addition to a wide collection of functions that are utilized for opening and running terminal commands, remotely installing APKs on your phone, copying files from your computer to your phone and vice-versa, rebooting phone into bootloader mode and a lot more; the function ADB backup is used for creating a full backup of your Android device, followed by saving the same to your desktop computer. While using this function, you’re not supposed to root your device, making the entire process of data backup convenient.

The command parameters format followed for ADB backup function is shown below:

Yet another basic command that can be used for taking a full device backup is:

By using the above command, you can choose to backup only the app and device data and not the APKs. All the stuff that’s being backed up is stored into the user’s current directory with heading as ‘backup.ab’.

With all those good things being discussed about Simple ADB Backup, I’m sure you too would have got all motivated to use the app for taking a full backup of all data that is being saved in your Android device. So, get started and choose this option for making the most of your device backup initiative.

Victoria Brinsley is a veteran technical writer for Appsted Ltd – a leading Android development company. In case you are looking forward to hire top Android app developers, just get in touch with her for best assistance.

Switching from Android to iOS? 15 Things You Must Know