Updated on November 27th, 2012 by Jules, Quertime Editorial in Videos

TED (Technology, Entertainment and Design) is a global set of conferences owned by the private non-profit Sapling Foundation. The annual event is formed to disseminate “ideas worth spreading.” It showcases top-notch and innovative thinkers in the disciplines of technology, science, performance and art. The speakers are given a maximum of 18 minutes to present their ideas in the most innovative and engaging ways they can. 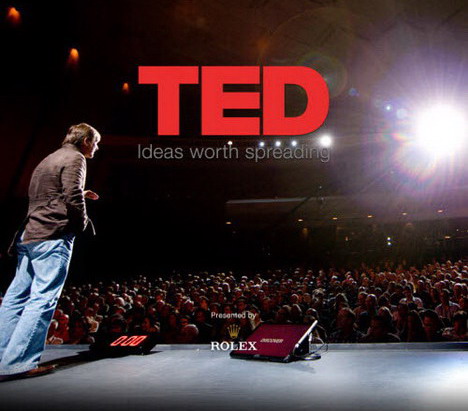 Some of you might not be familiar with this global conference, but do you know that many technological devices such as Xbox Kinect are inspired by one of the TED talks? In today’s post, we’ve compiled 25 most thrilling, amazing and visually appealing TED presentations including unbelievable SixthSense technology, breakthrough touch screen, advanced exoskeletons and many more. We promise these incredible videos from TED will absolutely make you WOW!

Remember to share the post with your friends and tell us which talk you find most amazing and inspiring?

Pranav Mistry: The Thrilling Potential of SixthSense Technology
At TEDIndia, Pranav Mistry demos several tools that help the physical world interact with the world of data — including a deep look at his SixthSense device and a new, paradigm-shifting paper “laptop.” In an onstage Q&A, Mistry says he’ll open-source the software behind SixthSense, to open its possibilities to all.

Pranav Mistry is the inventor of SixthSense, a wearable device that enables new interactions between the real world and the world of data.

You may also want to see how Pattie Maes and Pranav Mistry demo SixthSense.

David Gallo Shows Underwater Astonishments
David Gallo shows jaw-dropping footage of amazing sea creatures, including a color-shifting cuttlefish, a perfectly camouflaged octopus, and a Times Square’s worth of neon light displays from fish who live in the blackest depths of the ocean.

A pioneer in ocean exploration, David Gallo is an enthusiastic ambassador between the sea and those of us on dry land.

Blaise Agüera y Arcas is the architect of Bing Maps at Microsoft, building augmented reality into searchable maps. He’s also the co-creator of Photosynth, software that assembles static photos into a synergy of zoomable, navigatable spaces.

Researcher Johnny Lee became a YouTube star with his demo of Wii Remote hacks — bending the low-cost game piece to power an interactive whiteboard, a multitouch surface, a head-mounted display…

Jeff Han Demos His Breakthrough Touchscreen
Jeff Han shows off a cheap, scalable multi-touch and pressure-sensitive computer screen interface that may spell the end of point-and-click.

After years of research on touch-driven computer displays, Jeff Han has created a simple, multi-touch, multi-user screen interface that just might herald the end of the point-and-click era.

Theo Jansen Creates New Creatures
Artist Theo Jansen demonstrates the amazingly lifelike kinetic sculptures he builds from plastic tubes and lemonade bottles. His creatures are designed to move — and even survive — on their own.

Theo Jansen is a Dutch artist who builds walking kinetic sculptures that he calls a new form of life. His “Strandbeests” walk the coastline of Holland, feeding on wind and fleeing from water.

Clay Shirky: Why SOPA is a Bad Idea
What does a bill like PIPA/SOPA mean to our shareable world? At the TED offices, Clay Shirky delivers a proper manifesto — a call to defend our freedom to create, discuss, link and share, rather than passively consume.

A Robot That Flies Like a Bird
Plenty of robots can fly — but none can fly like a real bird. That is, until Markus Fischer and his team at Festo built SmartBird, a large, lightweight robot, modeled on a seagull, that flies by flapping its wings. A soaring demo fresh from TEDGlobal 2011.

Markus Fischer led the team at Festo that developed the first ultralight artificial bird capable of flying like a real bird.

Eli Pariser: Beware Online “Filter Bubbles”
As web companies strive to tailor their services (including news and search results) to our personal tastes, there’s a dangerous unintended consequence: We get trapped in a “filter bubble” and don’t get exposed to information that could challenge or broaden our worldview. Eli Pariser argues powerfully that this will ultimately prove to be bad for us and bad for democracy.

Pioneering online organizer Eli Pariser is the author of “The Filter Bubble,” about how personalized search might be narrowing our worldview.

Blaise Agüera y Arcas is the architect of Bing Maps at Microsoft, building augmented reality into searchable maps. He’s also the co-creator of Photosynth, software that assembles static photos into a synergy of zoomable, navigatable spaces.

David Merrill Demos Siftables
MIT grad student David Merrill demos Siftables — cookie-sized, computerized tiles you can stack and shuffle in your hands. These future-toys can do math, play music, and talk to their friends, too. Is this the next thing in hands-on learning?

David Merrill works on Siftables, tiny computer blocks that interact with each other to make networks (and music).

Julian Assange: Why the World Needs WikiLeaks
The controversial website WikiLeaks collects and posts highly classified documents and video. Founder Julian Assange, who’s reportedly being sought for questioning by US authorities, talks to TED’s Chris Anderson about how the site operates, what it has accomplished — and what drives him. The interview includes graphic footage of a recent US airstrike in Baghdad.

As the CEO of MIT-inspired WiTricity, Eric Giler has a plan to beam electric power through the air to wirelessly power your laptop or recharge your car. You may never plug in again.

Sheryl Sandberg: Why We Have Too Few Women Leaders
Facebook COO Sheryl Sandberg looks at why a smaller percentage of women than men reach the top of their professions — and offers 3 powerful pieces of advice to women aiming for the C-suite.

As the COO at the helm of Facebook, Sheryl Sandberg juggles the tasks of monetizing the world’s largest social networking site while keeping its users happy and engaged.

Kevin Slavin: How Algorithms Shape Our World
Kevin Slavin argues that we’re living in a world designed for — and increasingly controlled by — algorithms. In this riveting talk from TEDGlobal, he shows how these complex computer programs determine: espionage tactics, stock prices, movie scripts, and architecture. And he warns that we are writing code we can’t understand, with implications we can’t control.

Kevin Slavin navigates in the algoworld, the expanding space in our lives that’s determined and run by algorithms.

Bill Gates on Energy: Innovating to Zero!
At TED2010, Bill Gates unveils his vision for the world’s energy future, describing the need for “miracles” to avoid planetary catastrophe and explaining why he’s backing a dramatically different type of nuclear reactor. The necessary goal? Zero carbon emissions globally by 2050.

A passionate techie and a shrewd businessman, Bill Gates changed the world once, while leading Microsoft to dizzying success. Now he’s set to do it again with his own style of philanthropy and passion for innovation.

Stephen Hawking’s scientific investigations have shed light on the origins of the cosmos, the nature of time and the ultimate fate of universe. His bestselling books for a general audience have given an appreciation of physics to millions.

Aimee Mullins and Her 12 Pairs of Legs
Athlete, actor and activist Aimee Mullins talks about her prosthetic legs — she’s got a dozen amazing pairs — and the superpowers they grant her: speed, beauty, an extra 6 inches of height … Quite simply, she redefines what the body can be.

A record-breaker at the Paralympic Games in 1996, Aimee Mullins has built a career as a model, actor and advocate for women, sports and the next generation of prosthetics.

Tan Le: A Headset That Reads Your Brainwaves
Tan Le’s astonishing new computer interface reads its user’s brainwaves, making it possible to control virtual objects, and even physical electronics, with mere thoughts (and a little concentration). She demos the headset, and talks about its far-reaching applications.

Tan Le is the founder & CEO of Emotiv Lifescience, a bioinformatics company that’s working on identifying biomarkers for mental and other neurological conditions using electroencephalography (EEG).

Harald Haas: Wireless Data from Every Light Bulb
What if every light bulb in the world could also transmit data? At TEDGlobal, Harald Haas demonstrates, for the first time, a device that could do exactly that. By flickering the light from a single LED, a change too quick for the human eye to detect, he can transmit far more data than a cellular tower — and do it in a way that’s more efficient, secure and widespread.

Harald Haas is the pioneer behind a new type of light bulb that can communicate as well as illuminate – access the Internet using light instead of radio waves.

Anand Agarawala is the creator of BumpTop, an irresistible new desktop interface with a satisfyingly three-dimensional physicality and a fresh approach to interactivity.

Mike Matas: A Next-Generation Digital Book
Software developer Mike Matas demos the first full-length interactive book for the iPad — with clever, swipeable video and graphics and some very cool data visualizations to play with. The book is “Our Choice,” Al Gore’s sequel to “An Inconvenient Truth.”

While at Apple, Mike Matas helped write the user interface for the iPhone and iPad. Now with Push Pop Press, he’s helping to rewrite the electronic book.

John Underkoffler Points to the Future of UI
Minority Report science adviser and inventor John Underkoffler demos g-speak — the real-life version of the film’s eye-popping, tai chi-meets-cyberspace computer interface. Is this how tomorrow’s computers will be controlled?

Remember the data interface from Minority Report? Well, it’s real, John Underkoffler invented it — as a point-and-touch interface called g-speak — and it’s about to change the way we interact with data.

Vijay Kumar: Robots that Fly … and Cooperate
In his lab at Penn, Vijay Kumar and his team build flying quadrotors, small, agile robots that swarm, sense each other, and form ad hoc teams — for construction, surveying disasters and far more.

At the University of Pennsylvania, Vijay Kumar studies the control and coordination of multi-robot formations.

Eythor Bender Demos Human Exoskeletons
Eythor Bender of Berkeley Bionics brings onstage two amazing exoskeletons, HULC and eLEGS — robotic add-ons that could one day allow a human to carry 200 pounds without tiring, or allow a wheelchair user to stand and walk. It’s a powerful onstage demo, with implications for human potential of all kinds.

Eythor Bender is the CEO of Berkeley Bionics, which augments humans with wearable, powered and artificially intelligent devices called exoskeletons or “wearable robots.”

20 Vine Tips: How to Make Your Social Videos Stand Out