Updated on September 29th, 2016 by Quertime Writer in Info & News

Words cannot fully encapsulate just how important it is to know what your kids do on the internet. To minimize the impact social media has on your children, limit their internet time, learn what challenges your children face and don’t simply brush off your child’s concerns as “kids being kids.” 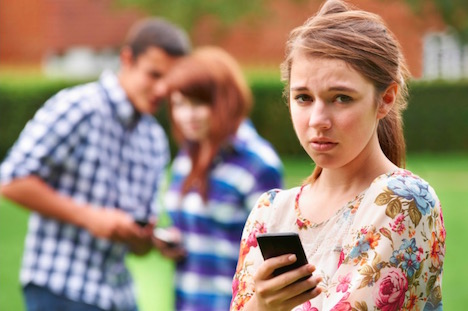 Below are the stories of 10 bright young children who cut their lives short after endless streams of online hate messages and bullying. 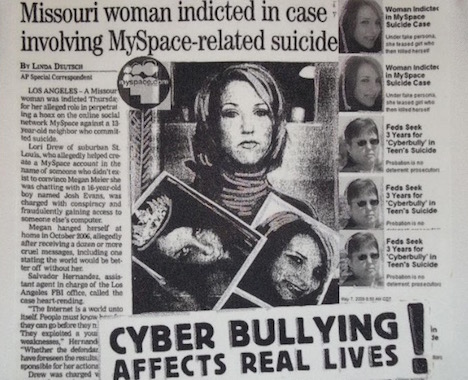 Megan Meier was your average 13-year-old girl on MySpace. A boy named Josh asked to be friends with her on MySpace and the two fell in love but, over time, the relationship fell apart. On October of 2006, Josh finally told her, “The world would be a better place without you.” Not long after, Megan hung herself. Megan Meier’s story is a cruel example of the negative effects of social media on teenagers. “Josh” turned out to be the mother of one of Megan’s former friends, whom Megan had a fight with months ago. No criminal charges were filed, because no laws existed for it back then.

Perhaps one of the single most famous cyberbullying cases is that of 16-year-old Amanda Todd. Her case gained national attention when she posted this horrifying video to YouTube detailing everything she’d been through until then.

Not long after the video was posted, committed suicide. Thankfully, she didn’t die in vain. Thanks to this video and the events surrounding her death, bullying was taken much more seriously than in years past. Amanda Todd’s experiences laid the groundwork for anti-bullying legislation in Canada, the United States and many other countries around the world. Her family now runs a nonprofit organization in her name.

The Ryan Halligan case is another example of how teenagers and social media don’t always mix well. At just 13 years old, Ryan committed suicide. Ryan posted an embarrassing story about himself to a classmate he trusted on Facebook. The classmate then took that story and shared it the entire school. The bullying took an especially cruel turn when a female classmate told Halligan she had a crush on him to get more embarrassing stories out of him. From Ryan’s stories, one of the girl’s friends spread rumors about Ryan, leading to even more bullying both online and offline. When Ryan couldn’t take it anymore, he hung himself.

Cases of cyberbullying like Jessica Logan’s hit really close to home because of how deeply personal they are. Jessica was a normal highschool girl, in love with who she thought was her soul mate. One of the things she did to show her love was send him nude pictures of herself. Eventually, Jessica and her boyfriend broke up. When that happened, Jessica’s ex-boyfriend posted those nude photos to other girls in their high school, who relentlessly harassed her. Hoping to speak out against them and stop the bullying, Jessica went to a Cincinnati television station and gave an interview, with her face blurred and her voice altered. Jessica committed suicide two months later.

Another example of senseless social media abuse lies with 16-year-old Jessica Laney, a girl with an Ask.fm account. She vented her life’s concerns and answered any questions others had for her openly. When one asker wanted her opinion on suicide, she stated that “Nothing is worth [killing yourself],” but soon the questions started turning more negative. She was harassed with statements like “Nobody even cares about you,” and “Can you kill yourself already?” Soon after, Jessica took her own life. Her death sparked outrage among her friends and classmates, who attempted to shut down Ask.fm altogether.

Hannah Smith’s case is another warning of the dangers of Ask.fm. Smith suffered from eczema and, given the site’s massive number of users, decided it wouldn’t be a bad idea to see if anyone knew any remedies for eczema. Unfortunately, some of those who replied did not have good intentions. Soon, Hannah was receiving endless messages in the vein of “Go die,” and “Drink bleach.” When the messages wouldn’t stop, Hannah hung herself, just like Jessica Laney.

The case of Audrie Pott’s ordeal is among the most extreme cases of cyberbullying there is. Audrie was one of roughly 20 students invited to a house party in 2012. Alcohol was served and Audrie took part, eventually passing out from too much vodka. While she was unconscious, three boys at the party sexually assaulted her. They then got permanent markers and humiliated her by coloring half of her face black and writing lewd remarks on every last part of her body. Finally, they took pictures of their misdeeds, sending digital copies to local students all over their city. After eight days of harassment and unwarranted shaming, Audrie committed suicide.

Yet another example of the toxicity of anonymous online trolls comes from the stories of Erin and Shannon Gallagher. Like Hannah Smith and Jessica Laney, Erin had an Ask.fm page, where she was endlessly harassed about her weight and her physical appearance. Distraught over the things they were saying, Erin threatened to hang herself. When the messages didn’t stop, Erin took her own life in 2012, at just 13 years old. Not long after Erin passed on, her 15-year-old sister Shannon, who was unable to cope with her sister’s death, also killed herself.

Cyberbullying cases like Alexis Pilkington’s are truly vile, and for one reason: her harassment continued after death. Alexis was a high school soccer star with a college scholarship lined up and a bright future ahead. Alexis got an account on a now-defunct website called Formspring.me, similar to Ask.fm. While her parents don’t believe that Alexis killed herself because of the online messages, there is still the fact that her Formspring.me page and her memorial page on Facebook still received many crass messages and photos. The Facebook memorial page has since been removed because of the harassment.

The heart-rending story of Rehtaeh Parsons shows that cyberbullying is still quite alive and well. On April 4, 2013, the 17-year-old attempted to hang herself, but wound up in a coma. She was taken off of life support three days later and died. About a year and a half prior, four boys gang raped Rehteah at a party while drunk and, as with Audrie Pott, the boys posted pictures of it online. People harassed her both on Facebook and via text message, propositioning her for sex. When the police stated there was insufficient evidence to charge the boys with her rape, Rehteah committed suicide.

Delan Cooper is a writer with years of experience in social development activity. He is passionate about providing good content to an online community. He writes for many companies including yourtown, the organisation provides a range of services to young people.

Protect Your Kid from Online Dangers That Seems to Appear Constantly

40 Worst and Most-Hacked Passwords You Should Never Use

7 Things Marketers Should be Learning from, According to the Internet