30 Most Popular Tweets of All Time

Posted on October 19th, 2016 by Quertime Writer in Social Media

In March 2006, Jack Dorsey introduced to the world a new medium of expressing their views and thoughts in the form of 140-character messages that later on known as “tweets”. You know what I am talking about and what is that medium, right? 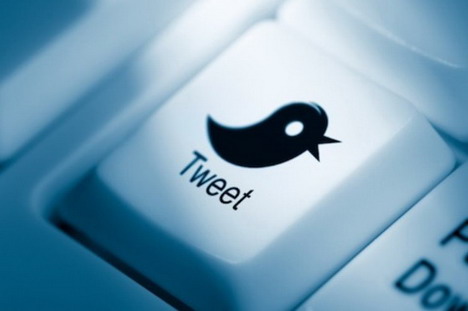 Twitter, soon gained popularity and has more than 300 million active users. The very fact that every well-known person be it politicians, sportsperson, actors/actresses etc. are on Twitter. Jack Dorsey changed the world with five words i.e. “just setting up my twttr“. It was the first tweet and bring in along the opportunities that we enjoy today.

Since then, there have been billions of tweets from a common man to the most elite person in the world. From political contention to celebrities’ selfies, whether it is for in support of someone or criticizing other, Twitter has been the common ground of all these activities. Twitter is the medium to express love and share emotions and feelings.

So, fasten your seat belt and get ready to know the tweets that made a buzz. Reaching easily and effectively to everyone within a fraction of second.

Here, we take a look at the 30 most popular tweets of all time.

No one can forget this exquisite selfie. It is the most popular tweet of all time. This is a start studded selfie from 2014 Academy Awards that includes Brad Pitt, Bradley Cooper, Jennifer Lawrence, Meryl Streep, Julia Roberts and other Oscar attendees. It has more than 3 million retweets garnering more than 2 million likes. The more the celebs the more good it. It took almost a dozen superstars to create a world record, though, it can’t get better than this. If you didn’t find your favorite star behind the frame, then don’t worry you might see them in some other frame. 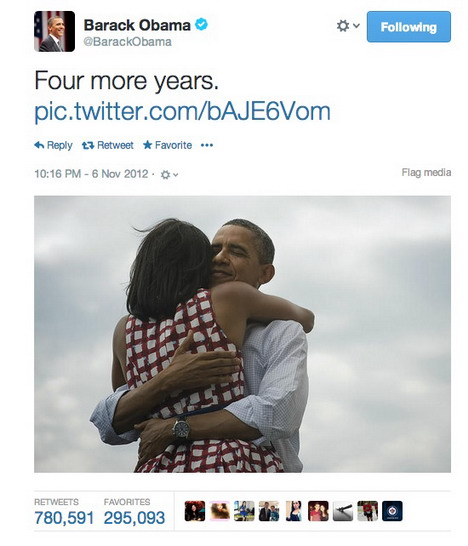 Even the president of United States of America couldn’t resist from tweeting. In 2012 when he was reelected as the president, Barack Obama’s staff posted a picture of him embracing the First Lady Michelle Obama. It became the most retweeted tweet of all time. What a way to express your emotions to the world and that too is received well by the Twitterati.

Astonished to find his name on the list again? Well, don’t be as his tweets are always retweeted.
When there were debates whether to legalize the same sex marriage and positively the result came out in the favor of it, then President Obama gave his affirmation to the Supreme Court’s ruling to legalize gay marriage in the US.

People are discriminated all over the world but Denny Januar Ali took to Twitter to send out a lovely message to the world. 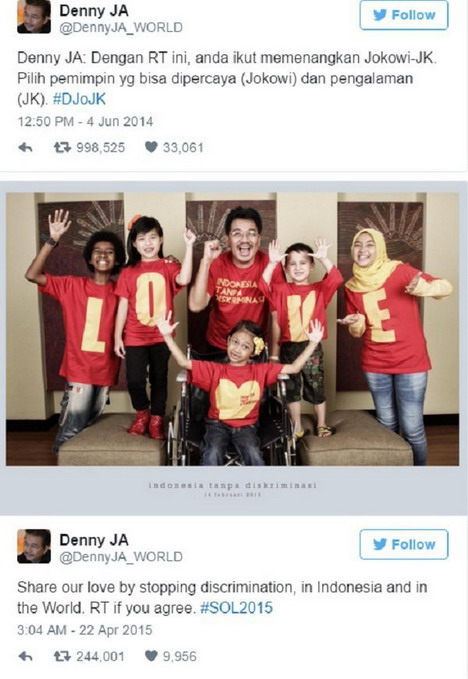 This tweet by Indonesian political analyst Denny Januar Ali has racked up a whopping 2.5 million retweets. In the post, he can be seen with children wearing t-shirts that spell out “love” and calling for an end to discrimination and also he is backing Indonesian presidential candidate Joko “Jokowi” Widodo.

This tweet also shows that Tweeter is beyond any geographical limitation and is a reminder of it global reach. You would be amazed to know that eighty percent of social network users reside outside the US.

What follows next in the list is the famous boy-band i.e. One Direction. All their tweets have been retweeted million times the reason being – their innumerable fans.

Girls just drool over them. Yes, we are talking about Boy band sensation One Direction. People express their love for others on Twitter and so did Harry Styles (one of the member of One Direction) and soon it went viral on the internet. Harry Styles tweeted this when news broke out that Zayn Malik is leaving the group. It has over 710,000 retweets. 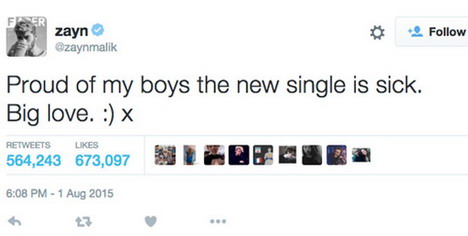 Another member of One Direction, this lad too took to twitter to appreciate the efforts of the new song and soon it was trending on the Twitter. In support of the One Direction’s song, Zayn Malik tweeted this which got over more than 550,000 retweets. 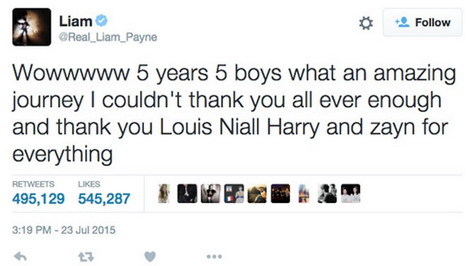 Another One Directioner in the list. On the fifth anniversary of the band “One Direction” he marked the announcement with this tweet bringing in more than 450,000 retweets and 550,000 likes. Not a bad choice after all.

People express their love on Twitter and so do one of the members of One Direction i.e. Louis Tomlinson. 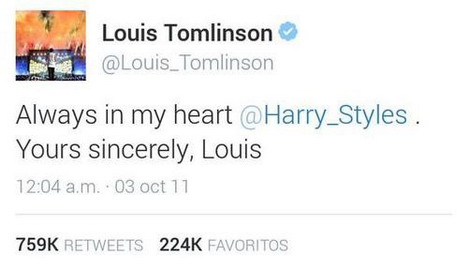 He expressed his love for Harry Styles (another band member of One Direction). As a consequence, it garnered in 759K retweets and become one of the most retweeted tweets of all time.

Celebs are for fans and fans are for celebs. There couldn’t be any good way of thanking your fans for their gratitude and love. Louis Tomlinson, taking his time out to thanks the fans. 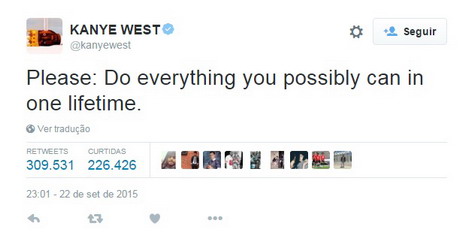 Kanye West tweeted a simple inspirational message that was retweeted more than 300,000. Celebs take time out their busy schedule to connect to their fans through social media, nonetheless, they know that sometimes, even a simple tweet can garner so much likes.

Shortly after becoming the king of the Saudi Arabia, King Salman sent a message of prayer and prosperity to the people which was well received and acknowledged by the people. 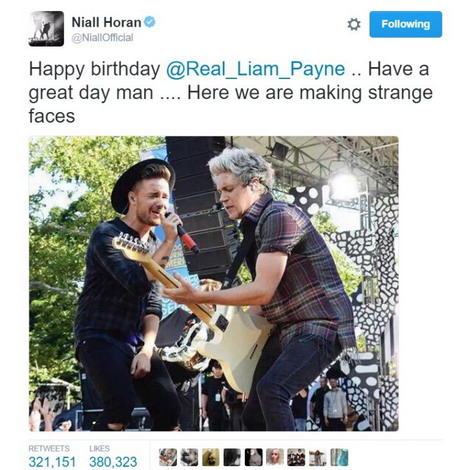 Wishing someone on that person’s birthday can become the cynosure of many eyes. If not the case with you but with One Direction’s Nial Horan who simply posted a picture of him along with Liam Payne wishing him on his birthday and soon it became one of the popular tweets of all time. 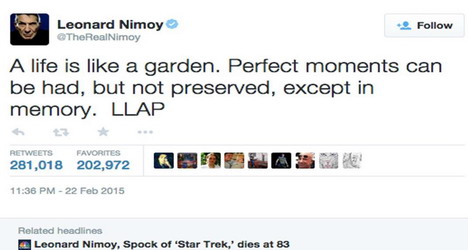 If you are a Star Trek fan, then there is a possibility that you might have had liked and retweeted his message. This was Leonard Nimoy’s last tweet before he passed away. 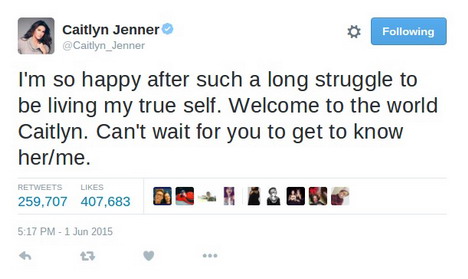 Caitlyn Jenner also known as Bruce Jenner took to Twitter to introduce herself to the world. Her twitter account became the fastest to reach a million followers. 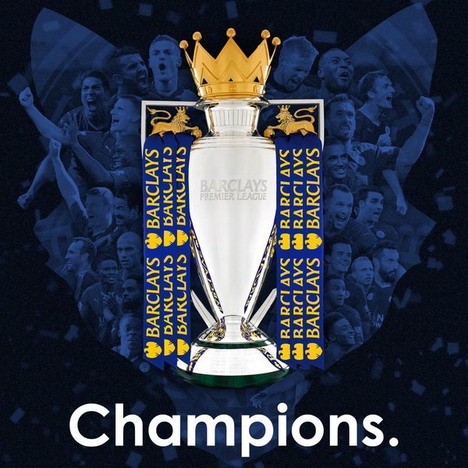 It is a great moment when underdogs make a dent in any field and a prouder moment when you are the underdogs. Same happened with Leicester city after winning the EPL league in 2016. With more than 400,000 retweets it surely includes in the list.

#tags are now everywhere. It is so common these days that there is hardly any post without the #tag. It changed the conventional method of discussion and the best part is users don’t need any external support for it, it is right there. Chris Messina first used it.

19. When Oreo won the Super Bowl of #brandtwitter 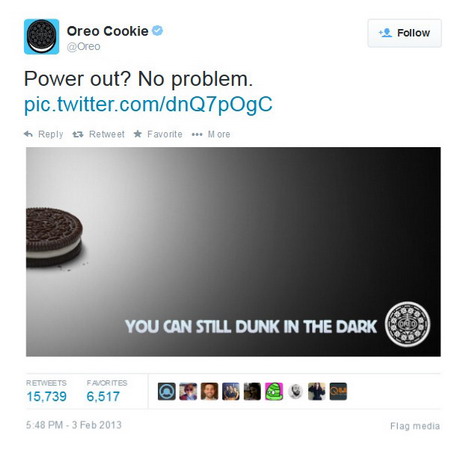 As if Oreo was already prepared for this moment. In 2013, when the Super Bowl had a massive blackout Oreo was ready with the tweet that still holds up. People were curious as what caused the Blackout and then Oreo came out with this response.

When the iconic spacecraft Phoenix landed on Mars and found evidence of water, NASA soon, took it to Twitter to share the exciting discovery with the world. 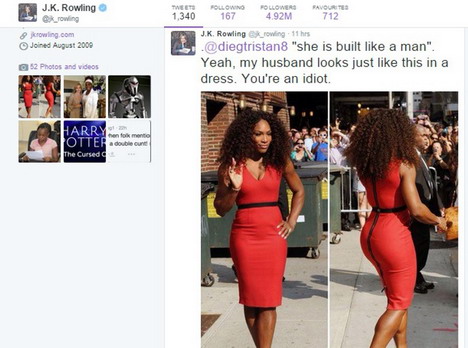 Where are all the Harry Potter’s fan at? You might be thinking that through Twitter, J.K Rowling revealed some secrets of Harry Potter, but wait, hold your thoughts, she did something applaudable. Serena Williams who is known for her on and off field outfit has always been at the wrath of critique but guess!!!! This time who has shut the Tweeter trolls who says that Serena is “built like a man”, none other than J.K Rowling. 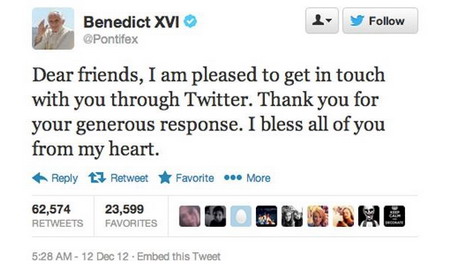 12.12.12 was the date when Pope Benedict xvi first tweeted to over his 1 million followers on the social networking site. The Pope’s first tweet was well received by his followers and has been retweeted more than 62,000 times.

It’s rare to see an incident like this. It isn’t a James Bond airplane that can fly as well float on water. It is an image of the U.S. Airways flight that landed on the Hudson river on January 15, 2009. 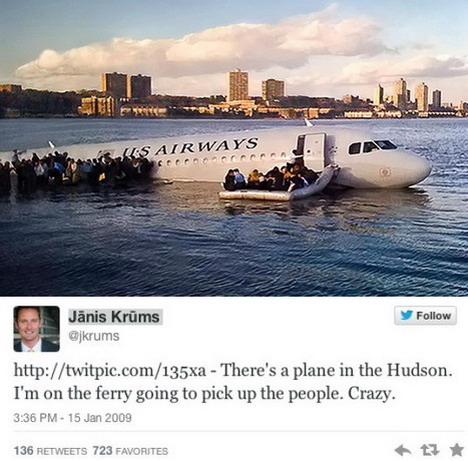 Janis Krums was on a commuter ferry rushing to rescue passengers. He snapped a photo and posted it one Tweeter. Soon this photo went viral and it was all over the internet followed by news network calling him for the interview.

Anthony Weiner was part of one of the biggest Twitter catastrophes to date. The then U.S. Congressman intended to send a private message to other but ended up sending it to the entire Twitterverse (the image shown above was the cover-up tweet as he deleted the original one as soon as he realized his mistake.

Digital channels are the perfect way for online marketing and promotion. You must remember the Old Spice’s commercial “The Man Your Man Could Smell Like” attracted so much attraction, Old Spice decided to take their marketing strategy to next level and through a series of tweet they actually did.

Their marketing efforts bore fruits and were successful, as a consequence, their Twitter following increased by 2700%. 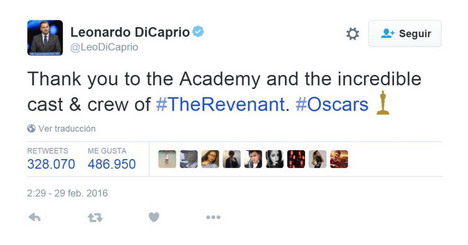 Finally he got what he deserved. With his acting skills he entertained us and in 2016, he won an Oscar for work in The Revenant.

Celebrities have a way to express their love for their fans and it is unique every time they express it. Justin Bieber too expressed his love for his fan. He wrote a tweet in honor of his six-year-old fan Avalanna Routh (The unofficial Mrs Bieber who died of cancer). This is Bieber’s most popular tweet till date. 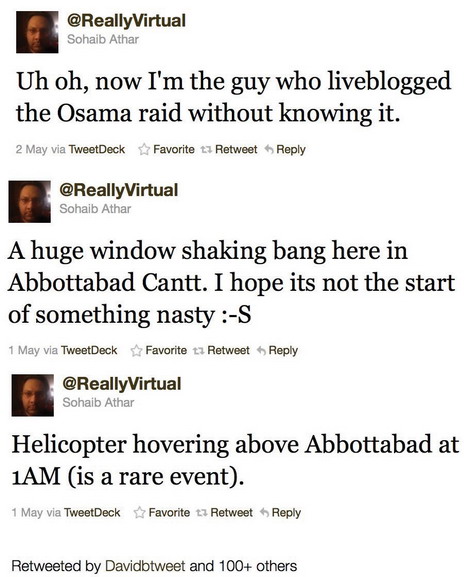 The death of Osama Bin Laden was to be under the cover and was one of the biggest pieces of news in 2011 but the fact that his death news came to limelight. It was not supposed to be revealed but an IT consultant in Abbottabad happened to be awake one night only to hear helicopters nearby which was an unusual occurrence in the area so, he began tweeting about it before realizing that what he had been hearing was the raid that eventually killed Osama. 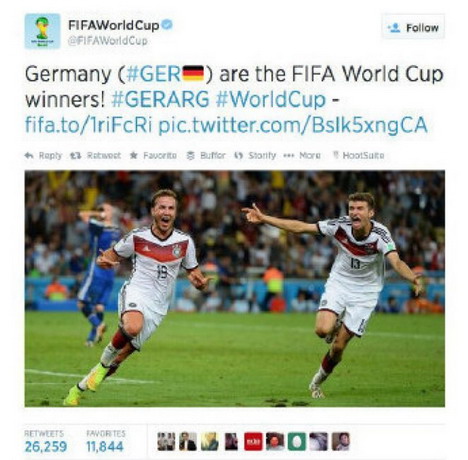 FIFA World Cup broke every record on Twitter. The moment when the Germans won the World Cup, their fans from across the world took to social media in record numbers. The moment Germany won it generated 618,000 tweets per minute. Overall, there were 32.1 million tweets from the final, short of the record 35.6 million set during the clash between Brazil and Germany, when Germany thrashed Brazil by 7-0.

Jessica Alba is an ed-tech enthusiast and has been associated with CWS Technology as a writer for more than 5 Years. CWS is the leading web development company that also provides Android App Development service and other IT solutions.